LK Advani and three other veteran BJP leaders  have issued a lacerating statement on the party's defeat in the Bihar assembly elections, demanding a thorough review and criticising its stand on the debacle.

"The results of Bihar election show that no lesson has been learnt from fiasco in Delhi," said the statement, signed by Mr Advani, Murli Manohar Joshi, Shanta Kumar and Yashwant Sinha, all 80 plus leaders sidelined by the party since Prime Minister Narendra Modi and BJP chief Amit Shah took charge of it.

The statement, which sources said was drafted in less than 10 minutes after the leaders met at the Delhi residence of Mr Joshi this evening, does not name PM Modi or Mr Shah, who led the party's strategy and campaign for the Bihar elections, but censures their leadership unambiguously and in strong words.

"To say everyone is responsible for defeat in Bihar is to ensure no one is held responsible. It shows those who would have appropriated credit are bent on shrugging off responsibility for the disastrous showing in Bihar," the leaders said.

"A principal reason for the latest defeat is the way the party has been emasculated in the last year... A thorough review must be done of the reasons for the defeat as well as the way the party is being forced to kowtow to a handful and how its consensual character has been destroyed," the statement added.

That review, it said, "must not be done by the very persons who have managed and who have been responsible for the campaign in Bihar."

Later at night, the BJP released a counter statement  issued by three former BJP leaders- Rajnath Singh, M Venkaiah Naidu and Nitin Gadkari to lend credibility. The statement took a dig at the senior rebels  by reminding them that former Prime Minister Atal Bihari Vajpayee and Mr Advani had set a "healthy precedent of the party collectively taking up responsibility for victories and defeats." The subtle barb was aimed at Mr Advani who was the BJP's prime ministerial candidate when the party lost 2009 elections.

On Sunday, the BJP had learned that it had won only 58 seats along with it allies, defeated emphatically by the Nitish Kumar-led Grand Alliance, which has got 178 seats, an absolute majority in Bihar.

On Monday, the group of 12 top BJP leaders called the parliamentary board, which includes PM Modi and Mr Shah, met and assessed that no one could be blamed for the Bihar defeat; they said the party had failed the gauge the mood in the state. Senior leaders like Rajnath Singh and Arun Jaitley have said no blame can be attached to the Prime Minister. 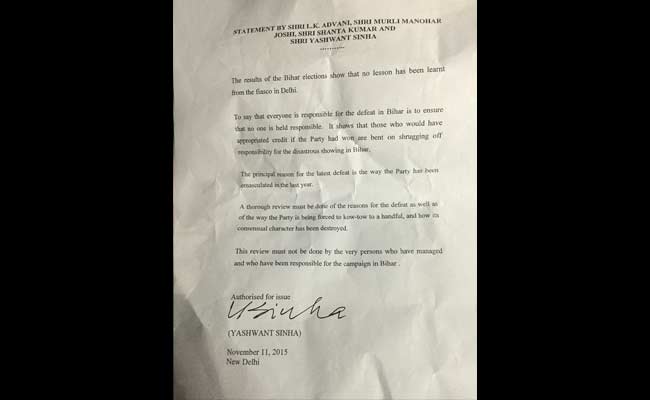