BJP Unable To Find Rajasthan Chief As No One Wants To Be A Scapegoat: Sachin Pilot

Sachin Pilot said Vasundhara Raje had visited Delhi not to seek development funds "but to lobby for (appointment of) a Rajasthan BJP president. 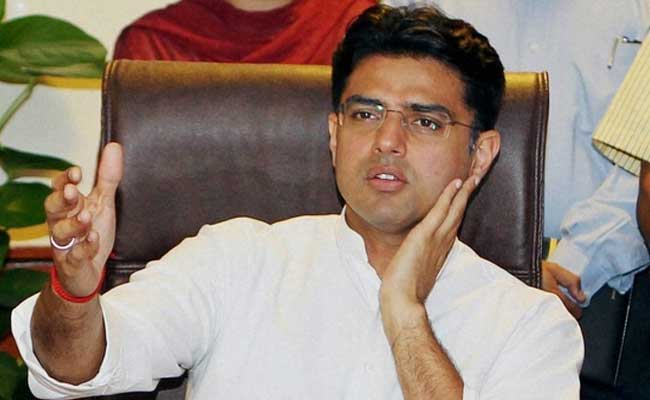 New Delhi: From a historical low in 2013, the Congress has bounced back in Rajasthan with support from all communities and will oust the BJP in the assembly polls later this year, says state Congress chief Sachin Pilot, who also feels that the BJP is finding it difficult to find a state unit chief as no one wants to be a scapegoat after the assembly elections later this year.

Sachin Pilot, 40, says that caste is not the pivot around which everything works in an election and young people were now looking beyond caste while voting.

Mr Pilot said it had been almost four weeks since the state BJP president Ashok Parnami "was made to resign".

"And for four weeks they have not found a person to do the job because nobody wants to be a scapegoat. They know in 5-6 months, they will lose the election. For four weeks, the BJP, the party with a difference and so-called largest party in the world, is unable to find somebody who is willing to do the job of a state president. This shows the reality of the government of Rajasthan and BJP itself," Mr Pilot told IANS in an interview.

Taking a dig at Chief Minister Vasundhara Raje, he said she had visited the national capital not to seek development funds "but to lobby for (appointment of) a state president.

"So there is obvious infighting (in BJP). There is a lack of coordination between the state and central governments, and people are suffering because of that," he said.

Mr Pilot said Raje has lost control over governance and there is "unemployment, agrarian distress, farmers' suicides, atrocities against tribals and Dalits and scams relating to land and mining".

Asked about former Chief Minister Ashok Gehlot's remarks, apparently aimed at him, that younger leaders should stay in the queue and those who break the line risked a premature end to their political career, Pilot referred to Congress President Rahul Gandhi's speech at the party's plenary in March where he had talked of breaking down walls.

Asked about Mr Gehlot's other remark that a state Congress chief should not be automatically considered as chief ministerial choice, Sachin Pilot said the party has been fighting elections under the leadership of Rahul Gandhi and will do so in Rajasthan also.

"The aim and objective for all of us is to secure a mandate for the Congress and who will get what position is not a matter of concern for me or others. We are fighting as a team," he said. 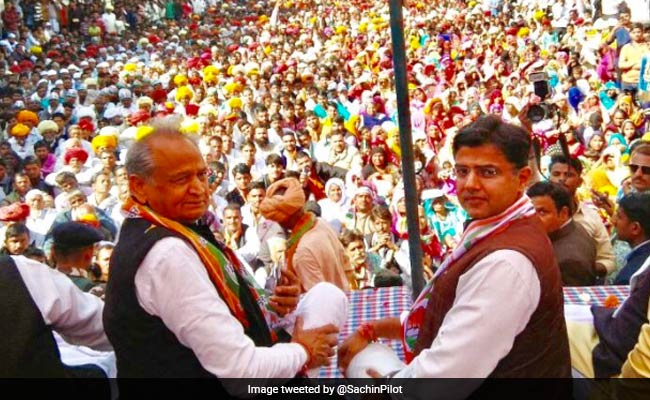 Ashopk Gehlot (left) was appointed as a Congress general secretary in March. (File)

On ticket distribution, Mr Pilot, who was appointed state Congress chief after the party's debacle in the 2013 assembly polls, said winnability and consensus will be the criteria and "people who have worked in the last four years to rebuild the party, their efforts will be rewarded".

"We are focusing on booths. The fake voters that the BJP had included, we are taking them out. And we are taking the battle to the polling stations. At the right time we will declare the candidates," he said.

Asked about the reasons for the party's debacle in the assembly polls, he said a factor was the party not being able to translate the good work done into political dividends.

"It requires some sort of communication strategy, some sort of self-marketing, which perhaps we didn't do well. But we lost (due) to many other reasons."

Sachin Pilot noted that he was a lawmaker at 26, a Union minister at 31 and made chief of the Rajasthan Congress at 35. "The party has given me so much; now it's time for me to give back to the party," he said.

On a query on the caste matrix, he said: "As far as caste communities are concerned, they will vote on issues and the Congress is the only party that has the capacity and the intent to carry all communities together, all castes together," he added.

Promoted
Listen to the latest songs, only on JioSaavn.com
The Congress had been reduced to 21 seats in the 200-seat Assembly in the 2013 elections but won four of six assembly by-polls and the two parliamentary by-elections to Ajmer and Alwar earlier this year. The party led in all the 16 segments of two parliamentary seats.

Mr Pilot said no ruling party in Rajasthan has lost a parliamentary by-election in the last 40 years and it showed the depth of anger against BJP across all communities and regions.
Comments
Sachin PilotRajasthan BJPVasundhara Raje