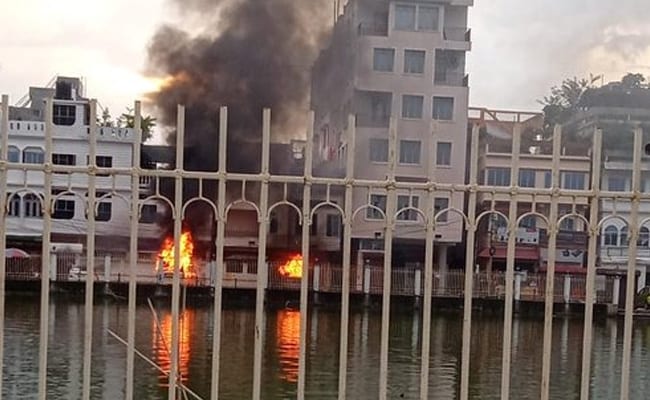 At least eight important party offices of the main opposition CPM in Tripura were burnt down or damaged, and many vehicles and other assets smashed on Wednesday in Agartala and three other districts, said the police and party sources.

The CPM leaders -- including party's politburo member and former Chief Minister Manik Sarkar -- said workers and leaders of the ruling BJP resorted to these attacks on the party headquarters and district office in Agartala, southern Tripura's Udaipur, Santir Bazar, Western Tripura's Dukli, and at Boxanagar, Bishalgarh and Khatalia in Sepehijala districts.

The BJP leaders, however, denied the allegations.

The CPM's district office at Bishalgarh was first damaged by a bulldozer then set on fire, reducing most of the assets and papers to ashes. Six vehicles and more than a dozen two-wheelers were burnt down in Agartala and other places, CPM has claimed.

Mr Sarkar, who was the Chief Minister for 20 years (1998-2018), said during the arson and unprecedented attacks, he spoke to Chief Secretary Kumar Alok and senior police officers, asking for help.

"In most places, the police remained mute spectators. The BJP men unleashed a reign of terror almost simultaneously in 8 to 10 places," he told reporters.

"On Monday, Sarkar while visiting his assembly constituency Dhanpur, provoked the CPM workers to unleash attacks on BJP workers. The people of the state do not want to repeat the political violence that was regular during the 25 years of CPM rule," he added.