"Is This Andhra Pradesh Or Pak?" BJP Demands Renaming Of "Jinnah Tower"

For the past few months, the BJP and other Hindu organisations have been demanding that the historic Jinnah Tower be renamed but the Y S Jagan Mohan Reddy government paid no heed. 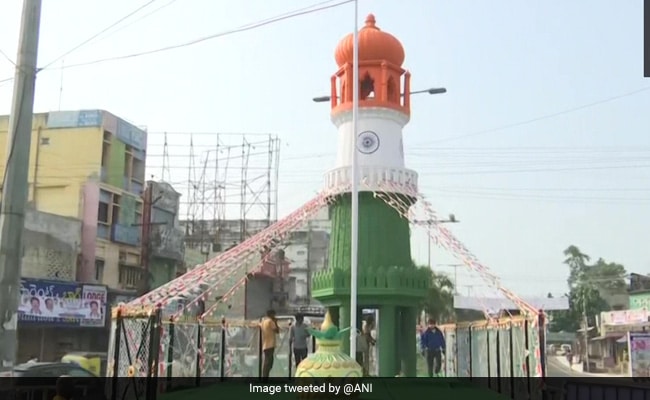 Several BJP leaders, including its national secretary Sunil Deodhar and workers were taken into police custody when they sought to march to the Jinnah Tower Centre in Guntur on Tuesday evening demanding that it be renamed after former President APJ Abdul Kalam.

After a meeting of the party's youth wing BJYM, the BJP leaders and workers tried to take out a protest march to Jinnah Tower but police foiled it and detained them.

For the past few months, the BJP and other Hindu organisations have been demanding that the historic Jinnah Tower be renamed but the YS Jagan Mohan Reddy government paid no heed.

On Tuesday, Mr Deodhar, the co-in-charge of the party for the state, was in the city and sought to lead the protest.

The BJP demanded that the Jinnah Tower be renamed as A P J Abdul Kalam Tower.

BJP Rajya Sabha member GVL Narasimha Rao condemned the high-handed behaviour of the police against his party leaders and their detention.

In a tweet, he wondered "if we are in AP or Pakistan".

State BJP president Somu Veerraju said not only their party but also the people demanded that the tower be renamed.

He said there was widespread support for the demand to remove Jinnah's name and the tower be renamed after Abdul Kalam. "The state government cannot adopt an oppressive stance over our demand," Mr Veerraju added.