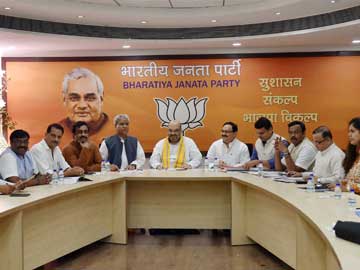 Newly-appointed BJP President Amit Shah at a meeting with the party’s Maharashtra leaders in New Delhi on Tuesday.

New Delhi: As BJP starts working on a strategy to wrest power in Maharashtra after a gap of decade-and-a-half, it has asked ministers of the Narendra Modi government, and of the states where it is in power, to spend a day in each of the 288 assembly constituencies to get a feedback from grassroot-level workers.

Amit Shah, the new BJP president, today met the leaders of his party's Maharashtra and Jharkhand units. This was first of a series of meetings he has planned with leaders of election-bound states. He is scheduled to meet his party colleagues from Haryana tomorrow.

Besides the three states, assembly polls will also be held in Jammu and Kashmir later this year. Delhi, which has been under a spell of President's rule since February this year, could also face snap polls.

Aware of the importance of these polls, Mr Shah, who took over as the BJP president on July 9, has kickstarted preparations to snatch power in these states. All of them are ruled by opposition parties.

But Maharashtra is crucial in the BJP's scheme of things. The party, which has formed a mahayuti (grand alliance) with Shiv Sena and four smaller players, senses an opportunity to reclaim power in the state after 15 years. In the Lok Sabha polls, the NDA bagged 42 of the 48 constituencies, and is hoping for an encore in the assembly polls.

Sources say the party has identified 19 seats which it could never win, and another 100 constituencies which it has won at least once, and is working on a winning strategy for these seats.

Promoted
Listen to the latest songs, only on JioSaavn.com
Seat-sharing talks with the Shiv Sena and other alliance partners, BJP state president Devendra Fadnavis said, will be held after July 20. The issue threatens to sour relations between the two partners, with the BJP staking claim to more assembly seats on the basis of its performance in the Lok Sabha polls.

In the national elections, BJP won 23 seats in Maharashtra, while the Shiv Sena's tally was 18. In the assembly polls, the Shiv Sena has till now contested more seats than its alliance partner.
Comments
Maharashtra Assembly electionsBJPShiv SenaModi governmentAmit Shah