Lalu Yadav's close-aide, Bhola Yadav has been named as an accused by the CBI in a land for jobs case and had served as an Officer on Special Duty to Lalu Yadav. 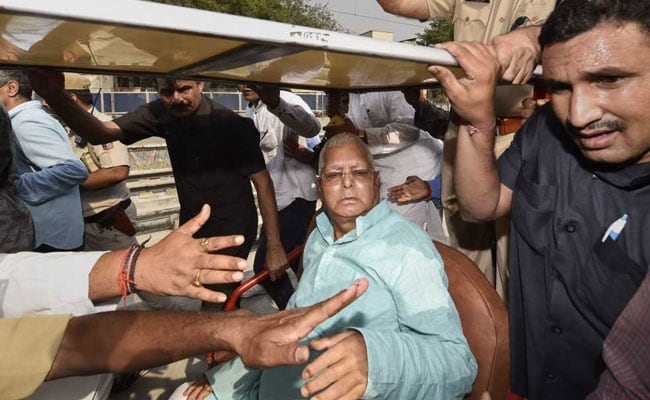 Bihar Minister Nitin Nabin said Lalu Yadav and his aides were "reaping what they have sown".

The Rashtriya Janata Dal (RJD) on Wednesday alleged that arrest of Bhola Yadav, a key aide of national president Lalu Prasad, was a fallout of the party's opposition to the ruling BJP at the Centre.

The BJP hit back, pointing out that most legal wrangles involving the RJD supremo, his family members and confidants had been lodged while the party ruled Bihar or shared power in the Congress-led UPA government at the Centre.

"It is no secret that agencies like CBI, ED and the IT department are being used to harass BJP's political opponents. Bhola babu's arrest is parakashtha (the limit)", said state RJD spokesman Shakti Singh Yadav.

A former MLA who is currently the RJD's national general secretary, Bhola Yadav has for long been the go-to man for those seeking an audience with the RJD boss.

He was arrested from Delhi where he had been camping since Mr Prasad was rushed in an air ambulance last month following deterioration in health.

Bhola Yadav, who has been named an accused by the CBI in a land for jobs case had also served as an Officer on Special Duty to Mr Prasad while the latter served his tenure as Railway Minister.

However, BJP leader and state minister Nitin Nabin rebutted the RJD's charge and claimed Prasad and his cohorts were "reaping what they have sown".

"Lalu Prasad has been sentenced in fodder scam cases which were lodged when he was the chief minister of Bihar. The CBI took these up when, as Janata Dal president he was calling the shots in the United Front government at the Centre", said Mr Nabin.

The BJP leader also pointed out that Mr Prasad and his family members were also named in land for hotels scam which, like the land for jobs scam, pertained to the RJD supremo's Railway Ministership.

"All those who have been guilty of wrongdoing will face action by the agencies which are functioning independently", asserted Mr Nabin.