Releasing BJP's manifesto for the Gujarat election, BJP chief JP Nadda had announced setting up the cell to identify and eliminate potential threats and sleeper cells of terrorist organisations and anti-India forces. 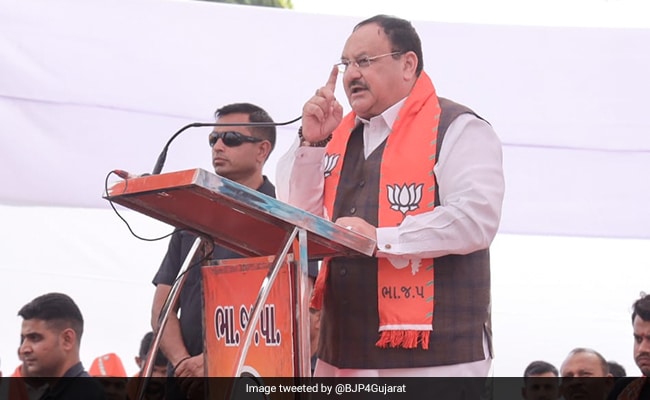 On "freebies", JP Nadda said one should "distinguish between empowerment and allurement".

BJP president JP Nadda on Sunday said like "antibodies keep a check on bad cells", it is the government's responsibility to maintain vigil on anti-national forces, as he batted for an anti-radicalisation cell announced by his party in its Gujarat assembly polls manifesto.

Releasing the BJP manifesto for the polls, Mr Nadda on Saturday had announced setting up the cell to identify and eliminate potential threats and sleeper cells of terrorist organisations and anti-India forces.

In an interview with PTI, he said it is the State's responsibility to keep a check on forces working against the country and society.

"Like antibodies in the human body, keep a check on bad cells. It is the State's responsibility to keep a check on anti-national cells in the country. Then there are some cells that work underground so this anti-radicalisation cell is required to keep a check on such cells," said the chief of the BJP, which has been in power in Gujarat for nearly 25 years.

On the Uniform Civil Code (UCC), which the BJP has promised in several assembly polls, including for the recently held Himachal Pradesh elections and now for Gujarat, Nadda said it is a "national issue" for the party and it is committed to it.

"The country's resources and its responsibilities are equal for all. Therefore, the UCC is a welcome step. We would like to implement the UCC in as many states as possible," he said.

Asked about the BJP not fielding a Muslim candidate in Gujarat, Nadda said his party believes in 'Sabka Sath, Sabka Vikas' (with all and development for all).

"Late Dr. (APJ) Abdul Kalam became the President (of India) with the BJP's support, then the (Narendra) Modi government at the Centre appointed Muslim governors as well. So, we follow the principle of 'Sabka Sath, Sabka Vikas', and tickets for elections are given purely based on winnability," he said.

On BJP announcing several "freebies" in its manifesto for the Gujarat polls like its rivals did, Mr Nadda said one should "distinguish between empowerment and allurement".

"Both the Aam Aadmi Party (AAP) and the Congress know they are not coming to power in Gujarat. Therefore, they can announce freebies without accounting for the funds and budget needed for them," the BJP chief said.

"While our programmes are welfare measures for empowering the poor and the needy. It is not like freebies, which are free for all, they are specifically meant for a segment of the population," he said.

He said that the BJP's welfare programmes are for the "empowerment" of the poor and the needy. This has resulted in them contributing to the economy, Nadda asserted.

Nadda, who has been holding election rallies and roadshows across Gujarat, is confident of a massive victory for the BJP in the state assembly polls. "Prime Minister Narendra Modi resides in the hearts of the people of Gujarat and they will again repose their faith in the BJP and the party will win another term," he asserted.

The BJP is eyeing to win Gujarat for a record seventh time.

Besides the Congress, the party has a new challenger in the form of the Aam Aadmi Party. The state will see two-phase assembly polls on December 1 and 5, while votes will be counted on December 8.