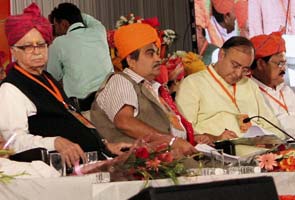 Surajkund (Haryana): The BJP wraps up its three-day brain-storming at Surajkund near Delhi today and while it is expected to sharpen its attack on the UPA government, it has signalled a shift in strategy. After two years of a rant over corruption and a few wasted Parliament sessions, the main opposition party is set to launch a more positive campaign after party patriarch LK Advani suggested that the shrill one was taking it nowhere.

That twist in the tale came yesterday, most tellingly in the speech of party president Nitin Gadkari, who told party workers at the national executive meet, "Let's not be known as the party of opposition. Let us be known as a party of good governance." BJP-ruled states like Gujarat, Himachal Pradesh and Chhattisgarh, he said, were doing well "despite the global slowdown and despite a central government which ignores opposition-ruled states. Let every worker spread the word about that." (BJP's 'makeover': A more positive campaign)

The new mantra, said a party leader, would be to give "people unhappy with the Congress not politics, but alternatives and solutions." Mr Gadkari also proposed a "vision document 2025".

Today, Mr Advani will take centrestage as he addresses the gathering of over 300 top party leaders. Also keenly watched will be Gujarat Chief Minister Narendra Modi's speech. The party amended its constitution today allowing party chief Nitin Gadkari to get a second term. Also on the agenda for the final day is a political resolution against the UPA government's policies and the corruption scandals it is mired in.

Mr Advani's influence is also apparent in the party now deciding to go all guns blazing on the issue of foreign direct investment in retail. It had so far gone slow on the senior leader's suggestion that the government be attacked on the issue and a special session of Parliament be demanded to discuss it. On Thursday, the pro-reform right wing party took a left turn and spelt out its intent to make it an anti-aam aadmi issue.

Leader of opposition in the Rajya Sabha, Arun Jaitley said, "We are not against reforms but every change cannot be called a reform."  So saying, the party has now aligned its stand with that of parties like Mamata Banerjee's Trinamool Congress, which walked out of the UPA last week. Congress' allies - the Samajwadi Party and the DMK - have protested on the streets against it and non- UPA parties like the Left Front, the Biju Janata Dal (BJD) and the AIADMK have opposed it heavily.

The BJP, say sources, senses an opportunity to bring about a united opposition on the issue of FDI in retail in the Winter Session of Parliament to build a sense of the house against the government move.

So yesterday, the party resurrected a 2002 letter written by Manmohan Singh that, it says, suggests the Prime Minister was against the Foreign Direct Investment or FDI in retail when he sat in the opposition. In the letter - which has been used by the BJP before and even by Mamata Banerjee recently to bolster their argument against FDI in retail - Dr Singh, who was then the Leader of the Opposition in the Rajya Sabha, wrote to the chairman of a Mumbai-based trade body on December 21, 2002, saying that the issue of FDI in retail had been raised in the Upper House two days before and that "The finance minister gave an assurance that the government had no proposal to invite FDI in retail trade." The BJP-led NDA ruled at the Centre then. (BJP releases 2002 letter where Manmohan Singh opposed FDI)

The party has also dug up another letter - this one written by the Federation of Associations of Maharashtra to Dr Singh in December 2004, by which time he was PM. In this letter, the Federation reminded the PM that he had categorically told a delegation of traders that "we should not permit FDI in retail trade... India does not require the kind of reforms which would, rather than creating employment, destroy employment".

The decision to allow foreign mega-stores to come into the retail sector in India was part of a number of key decisions the government made earlier this month; it has defended them as necessary to reinvigorate a flagging economy.

The BJP wants to push the government to withdraw FDI in retail which is being termed as Manmohan Singh's return on the reform road and end of a policy paralysis of the Centre. The party hopes that a coming together of parties who are with the Congress and those who are ideologically opposed to it will end its long isolation, indicated best when Mamata Banerjee walked out of the UPA but the Samajwadi Party grudgingly refused to dump the Congress as it would benefit the BJP.

The BJP is pressing for the withdrawal of the FDI move as once implemented it would be difficult for the saffron party to scrap it or support it, if the NDA does get to form government in 2014, say sources.