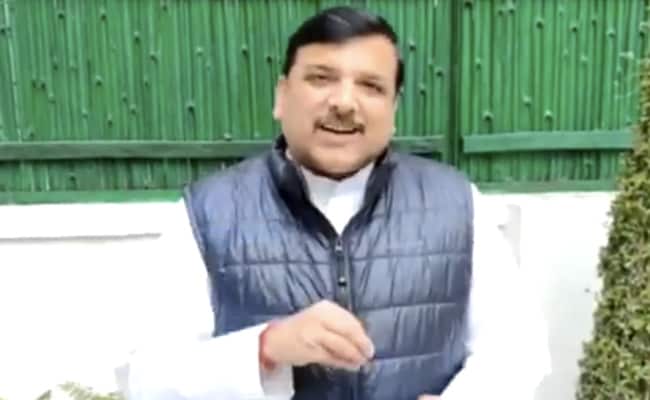 Aam Aadmi Party MP and its in-charge in Uttar Pradesh Sanjay Singh has accused the BJP of betraying the backward classes in the state and claimed that there is a lot of anger among the community because of the "atrocities" of Chief Minister Yogi Adityanath.

Addressing a rally of the backward sections of the society organised by his party in Nagra area of the district on Monday evening, the Rajya Sabha MP gave a call to vote the BJP out of power, saying the country will be run according to the constitution and "not by dictatorship".

Mr Singh, on Monday, said people are facing immense problems because of price rise and struggling to meet family expenses. In such a situation, confiscation can happen only if anybody had got anything left, he said.

"Due to the atrocities of Chief Minister Yogi Adityanath there is a lot of anger among the most backward classes," the AAP leader said.

"The BJP formed the government by luring the backward classes. But now, it is continuously snatching their rights," he alleged and called upon the community to unite and throw the saffron party out of power.

The AAP Rajya Sabha MP alleged that the Adityanath government has "insulted" the Constitution by "rejecting" reservation for the backward classes in the recruitment of 69,000 teachers in Uttar Pradesh.

He also slammed the Narendra Modi government for telling the Rajya Sabha that no death due to lack of oxygen was specifically reported by states and UTs during the second COVID-19 wave.

During the second wave of COVID-19, people were dying due to lack of oxygen and bodies were rotting in the rivers but the Centre is saying that no one has died due to oxygen shortage, Singh claimed.