Bitti Mohanty, rape convict who was on the run for six years, denies help from top cop father 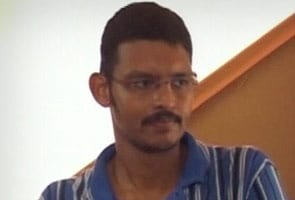 Kannur: After six years of being on the run, Bitti Mohanty, the son of a senior cop in Odisha, is finally in jail. Convicted of raping a German national, Bitti was arrested on Friday night by the Kerala Police. He has reportedly denied that he was being helped by his father, BB Mohanty, former Director General of Police (DGP) of Odisha. However, investigations suggest that at least three close relatives were in constant touch with Bitti while he was hiding.

In 2006, Mr Mohanty stood surety for his son's return to prison in 15 days. When Bitti jumped parole, Mr Mohanty was accused of helping his son escape and was also arrested.

Kerala police on Friday night arrested the man who called himself Raghav Rajan on charges of impersonation. The police was asked to investigate him by his employer, the State Bank of Travancore, after the bank received an anonymous tip-off. When police arrested him, Rajan confessed to actually being Bitti Mohanty. He has been sent to 14 days in judicial custody. The Rajasthan Police will join the investigations tomorrow and is likely to ask for Bitti's custody, which the Kerala Police may object to since it's yet to begin its probe, say sources.

Bitti was convicted in March 2006 for raping a 26-year-old German national in a hotel in Alwar, Rajasthan. On November 20, he was allowed to leave prison on parole on the plea that his mother in Odisha was unwell and wanted to meet him. He had been missing ever since.

Promoted
Listen to the latest songs, only on JioSaavn.com
Bitti had been living in Kerala for the last three and a half years, had a fake passport, a driver's licence and even a college degree certificate in the name of Raghav Rajan, police sources said. He had been working at the bank for two years now, after acquiring an MBA degree from Kannur.