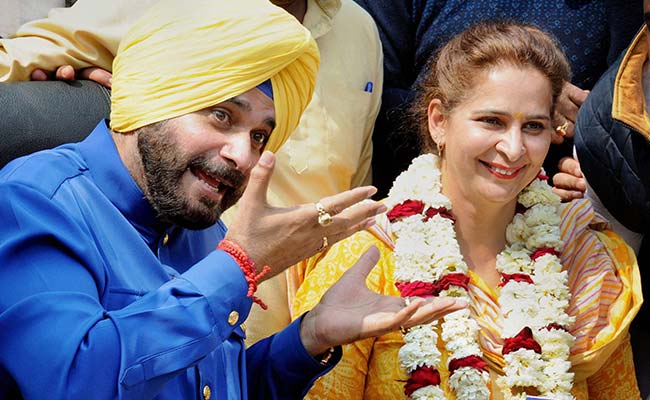 Chandigarh: Former Punjab minister and Shiromani Akali Dal (SAD) general secretary Bikram Singh Majithia on Monday demanded registration of a criminal case against state Local Bodies Minister Navjot Singh Sidhu and his wife Navjot Kaur for allegedly disclosing to the public the contents of a Special Task Force (STF) report, which was submitted to the high court in a sealed cover.

Bikram Singh Majithia alleged that Navjot Singh Sidhu and his wife had disclosed the contents of the report at a press conference in Chandigarh last week.

He also enquired how Mr Sidhu and his wife had access to the report.

"There is no way a report in a sealed cover can be accessed by a woman, who does not hold any official position in the government, and by a man, who has no capacity to access it. Only the registration of a case and a thorough investigation can unearth the larger conspiracy as well as the people behind it," he said.

Describing the "leak" of the STF report as the "gravest of criminal contempt", the Akali leader said the entire affair smacked of the worst kind of conspiracy and an attempt to make a mockery of the judicial process.

"It is unheard that a report, sealed on the orders of the Punjab and Haryana High Court, has found its way into the hands of unauthorised persons with vested interests," he added.

At the press conference, Mr Sidhu had sought the arrest of Mr Majithia, accusing him of having links with drug peddlers, while claiming that he was aware of the findings of the STF report. Ms Kaur had also addressed the media, along with her husband.

Promoted
Listen to the latest songs, only on JioSaavn.com
The Punjab minister had claimed that the "STF has made it clear that there is a substantial evidence of the role of Bikram Majithia in drug peddling, which needs to be probed. The Punjab government cannot ignore these facts".

Mr Majithia said "all the players in this drama" needed to clarify as to what was the urgency, desperation or personal agenda to disclose the contents of a report, which was being monitored by the high court and on which the government was to submit a report after due perusal.