Bihar Assembly Election 2020: Tejashwi Yadav, who has centred his election campaign on his promise of 10 lakh jobs if voted to power, once again pointed out that employment is a key issue in the state. 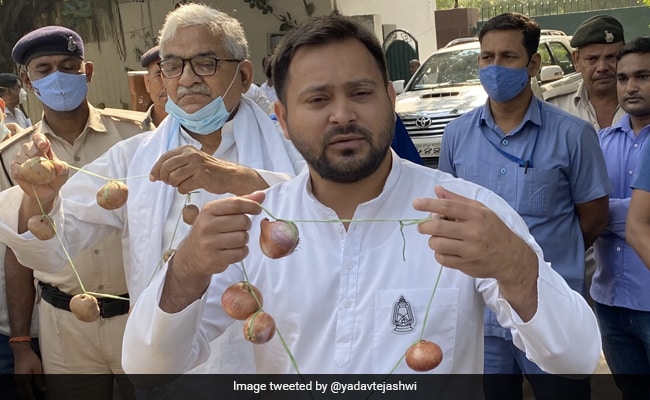 Bihar Assembly Elections 2020: Tejashwi Yadav hit out at the government over onion prices.

Rashtriya Janata Dal leader Tejashwi Yadav this morning was seen holding up a garland of onions, hitting out at the centre over the rising prices of the vegetable. Mr Yadav's attack comes two days before Bihar votes in the first phase of the assembly election.

"The common man is suffering because of back-breaking inflation, corruption and unemployment. Work and business have come to a standstill. Farmers, labourers, youth and traders are struggling to meet their food needs. The BJP has killed small businessmen. They roam round wearing onion garlands when there's price rise. Now, we're giving them this," Mr Yadav, 31, tweeted in Hindi, along with two photos of him and another leader holding up onion garlands.

Mr Yadav, who has centred his election campaign on his promise of 10 lakh jobs if voted to power, once again pointed out that employment is a key issue in the state.

"Those who were speaking about onion when it touched Rs. 50 to 60 per kg are now silent when it has crossed Rs. 80 per kg. Farmers are being destroyed, youth is unemployed. Bihar is poor and people are migrating for education, jobs and medical help. Starvation is on the rise," he told reporters, attacking the government.

Onion prices have shot up sharply in several parts of the country in the past few weeks, with prices touching Rs. 90 and Rs 100 per kg, in the wake of damage to the standing kharif crop in producing areas due to heavy rainfall as well as hoarding.

The centre on Friday imposed stock limits on both retailers and wholesales with immediate effect till December 31 in order to boost domestic supply and provide relief to consumers.

Consumer Affairs Minister Piyush Goyal tweeted that the Narendra Modi government has taken another step to curb hoarding and check prices. Stock limits have been imposed on retailers and wholesale traders of onion.

Bihar Assembly elections will be held in three phases on October 28, November 3, and November 7. The result will be declared on November 10.