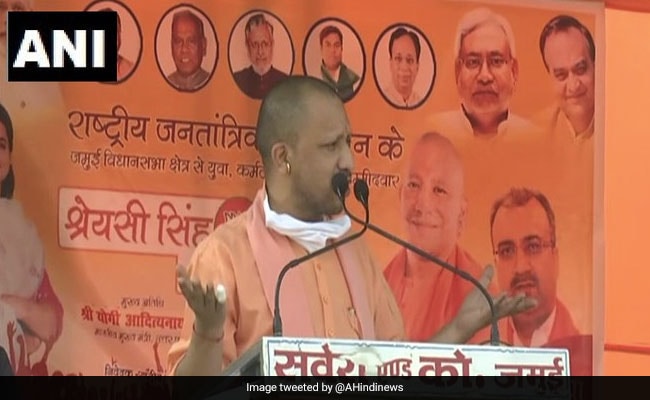 The Congress-RJD combine's poll pact with ultra-Left CPI(ML) in Bihar is deplorable and unfortunate as it can lead to a resurgence of naxalism in the state which has reeled under Maoist violence for long, Uttar Pradesh Chief Minister Yogi Adityanath said on Wednesday.

On the second day of his campaign for the upcoming assembly elections in the state, where he held back to back rallies in Jamui, Bhojpur and Patna districts, the BJP star campaigner also deftly played the caste card, invoking memories of leaders belonging to communities that dominated the respective constituencies.

He also praised Prime Minister Narendra Modi and Union Home Minister Amit Shah for the resolve they showed in scrapping Article 370, facilitating construction of Ram temple at Ayodhya, stamping down terrorism and offering help to persecuted minorities of other countries through the Citizenship Amendment Act.

"All this is making the people of the country happy. But Pakistan Prime Minister Imran Khan is visibly frightened and, strangely, leaders like Rahul Gandhi and Assaduddin Owaisi too are perturbed. Try to understand their mindset and beware of such elements," he said.

True to form, Yogi Adityanath began all his speeches with chants of Bharat Mata Ki Jai and ended with roars of Jai Sri Ram, reminding the people of the state that for him Bihar is the maayka (native place) of goddess Sita.

"I would have loved to have at least one representative from all villages of Bihar at the foundation stone laying ceremony at Ayodhya. This could not happen because of COVID-19. But I look forward to receiving pilgrims from Bihar once the temple is complete as I hope that the pandemic will be over by then," he said.

Ending the day with a rally at Paliganj in rural Patna, where he campaigned for sitting MLA Jai Vardhan Yadav who recently quit the RJD and joined Chief Minister Nitish Kumar's JD(U), Yogi Adityanath accused the opposition of trying to give a fresh lease of life to elements who chant slogans favouring the disintegration of the country at premier educational institutions.

The allusion to the students agitation at JNU was made in the backdrop of the opposition Grand Alliance fielding Sandeep Saurav, a former leader of the JNUSU who is fighting on a CPI(ML) ticket.

The tie-up of Congress-RJD with CPI(ML) is an unfortunate and deplorable attempt to revive naxalism in a state which has suffered a lot on account of the menace, he said.

The UP chief minister also remarked that he had a sense of pride over the coincidence that he comes from Lord Krishna's birth place and have landed on Bihar's soil on the birth anniversary of its first and visionary Chief Minister Sri Krishna Sinha.

Sri Krishna Sinha, who ruled the state till his death in 1961, is hugely popular with upper caste Bhumihars, traditionally the supporters of the BJP who have a sizeable presence in Paliganj.

The NDA is, however, in a fix in the assembly segment with rebel ally LJP of Chirag Paswan fielding Usha Vidyarthi, a Bhumihar who formerly represented the seat. She quit the BJP after she was denied a ticket.

At Tarari, which falls in Rajput-dominated Bhojpur district, Yogi Adityanath invoked the memory of 1857 hero Veer Kunwar Singh, the legendary ruler of Jagdishpur.

Beginning his Tarari address with a greeting in local dialect Bhojpuri, Yogi Adityanath, who hails from Uttarakhand but has been based in Gorakhpur for decades, reminded the locals of their valiant attempts at rooting out naxal violence.

In the years since Modi took over, Pakistan-sponsored terrorism has been dealt with and 95 per cent of naxalites have been rooted out. "Wait for some more time and the remaining five per cent too will be finished," he said.

In Jamui, where the BJP has fielded ace shooter Shreyasi Singh, Yogi Adityanath made an emotional appeal to voters, reminding them of her late father Digvijay Singh, a former Union minister who is held in high esteem by the Rajputs of the area.

Observing that the rallies in Bihar were well-attended despite the pandemic, Yogi Adityanath said, "Most of you are young. Do remember when your brethren were forced to return from far-off places during migration, they might have faced some ill-treatment in Delhi or Maharashtra but they were welcomed with open arms in UP."

"Do make it a point to reach out to your near and dear ones and acquaintances with messages over phone and social media that the NDA must be voted back to power for Bihar's well being," he said.

Delhi Man Kills Father For Refusing To Give Money For Drugs, Arrested