"He Looked Like A Terrorist": The Horror Story Of Karnataka Mob Attack

Mob lynching: The problem is that people "may not be able to read or write, but everyone understands photos and videos," said Rema Rajeshwari, a superintendent of police in Telangana 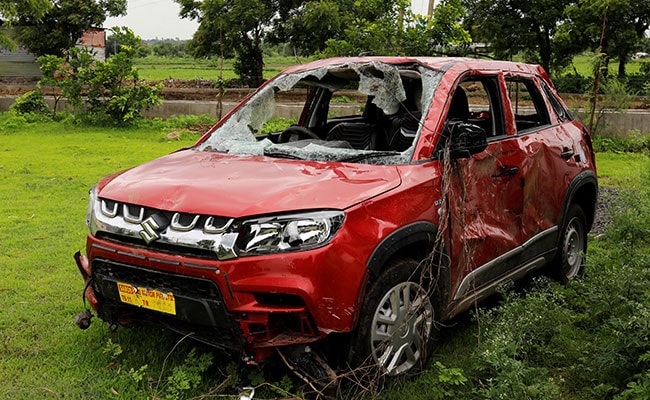 Bidar mob lynching: The car destroyed during the mob lynching that killed an IT professional

In the tiny hamlet of Murki in Karnataka, inspector VB Yadwad surveyed a pile of bricks and stones in a ditch where he and other police officers had been attacked earlier this month while trying to save a group of five men on a road trip from a violent mob.

"We tried hard to stop them," said Mr Yadwad, pointing to injuries on his back. "They wouldn't listen to anyone."

Mr Yadwad was one of eight policemen who rushed to the village on July 13 to try to control a mob of more than 200 that attacked the five friends, wrongly assuming they were child kidnappers.

The vicious assault left one of the five men, Mohammed Azam, a UK-educated IT worker from Hyderabad, dead, and at least two of the others badly beaten. All eight officers were injured, two seriously.

Mr Azam, who was 32 and worked for global consulting services firm Accenture, is one of the latest victims of a wave of lynchings in India, as outnumbered police struggle to contain mob violence triggered by false messages about child kidnappings spread via platforms like WhatsApp messaging service, which is very popular in India.

The government says it is not tracking data for lynchings, but data portal IndiaSpend has tallied more than 30 deaths from nearly 70 such incidents since January 2017. 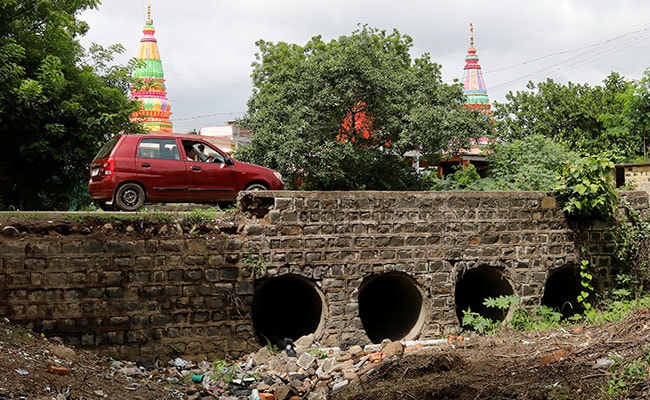 The site where Mohammed Azam was lynched by a mob in Murki village, Karnataka (Reuters)

Prime Minister Narendra Modi's administration, which has been facing criticism from opposition parties and the public for failing to do enough to stop the lynchings, has blamed WhatsApp, warning the messaging service of legal action if it did not curb the spread of fake news.

On July 20, WhatsApp said it was limiting the number of people someone can forward messages to simultaneously, and said it was considering more changes to curb the spread of fake messages in its largest market. But it is unclear how much this will restrain mob violence.

Police probing the lynchings of Mr Azam and others say they are often triggered by deep-rooted prejudices. Mr Azam's own job at Accenture, according to his younger brother Akram, included reviewing the propriety of video content before it was uploaded to Alphabet Inc's YouTube.

"India is already vulnerable due to religious and caste fault lines," said Rema Rajeshwari, a superintendent of police in Telangana, where some recent lynchings took place. "When you add WhatsApp to the mix, things can easily spiral out of control." 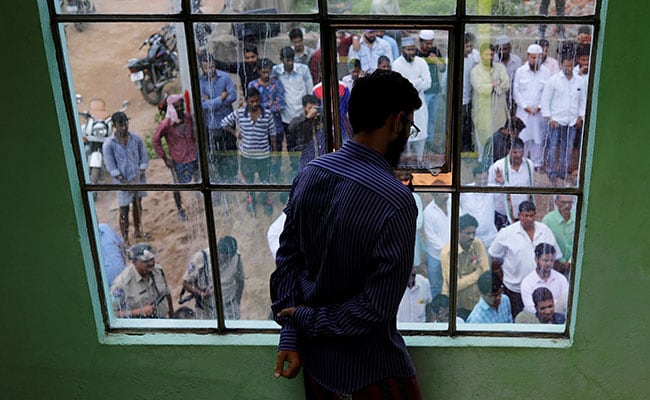 Mohammed Aslam, brother of Mohammed Azam, who was lynched by a mob, looks out of his house as people gather to give their condolences to the family in Hyderabad (Reuters)

In Murki, messages circulating in a local WhatsApp group, late in the day Mr Azam was killed, simply said: "Child kidnappers found in Murki." Videos and photos of Mr Azam and his four friends, taken just before, were attached.

The five, who were in a new cherry red SUV, had set out from Hyderabad that day for a drive into the countryside. While passing through a hamlet where they planned to picnic, they tossed chocolates towards a group of children, according to three of the survivors.

What the men thought was a kind gesture in a poor village cost Mr Azam his life, as a mob of angry villagers savagely attacked him and his friends.

The assault began when the group stopped to take selfies amid lush green fields beside a pond, just after driving by the kids, according to interviews with the survivors, police, villagers and other eye witnesses.

Three villagers first walked up and started deflating their tyres. "We asked them why are you removing the air? They yelled: you men are child kidnappers," said retail worker Mohammed Afroz, one of the four survivors.

While the five tried to plead their innocence, dozens of villagers gathered. Some carried pick-axes and sticks. Photos and videos of the five men were posted on a 180-member WhatsApp group named 'Mother Murki', according to police. 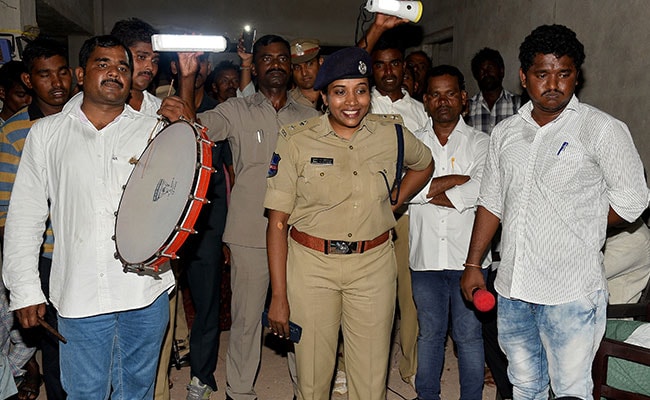 Rema Rajeshwari, a superintendent of police, speaks to villagers during a campaign to raise awareness on fake news in a village in Gadwal, Telangana (Reuters)

That video, seen by Reuters, shows the five trying to calm the crowd. It did not work. Salham Al Kubassi, a Qatari national, who was friends with Mr Azam, was among the first to be hit. While two of the friends tried to reason with the mob, Mr Kubassi, who is a policeman in Qatar, jumped into the SUV with Mr Azam and their friend Mohammed Salman, who works at a Hyderabad car repair shop, and sped away, according to police and the survivors.

But a makeshift roadblock was set up at a nearby junction. The SUV careened off the road after it hit a tree trunk the villagers had put in the road and ended in a small, dry riverbed, police said.

It was the attack here that claimed Mr Azam's life. Many villagers, both men and women, threw bricks and rocks at the toppled SUV, shattering its windows. Some then tied ropes around Mr Azam and Mr Salman and dragged them out of the vehicle as at least 200 others gathered, hurling abuse at them, police said. "They came here to steal kids. Let's hit these bastards and kill them!" people in the mob shouted, according to a police report. "Don't let them go!"

While police say there were no child kidnappings recorded in or around Murki, child trafficking is a problem in India, and many children are sold into slavery, especially forced labour. About 250,000 children were registered as missing on the government's Track Child portal between January 2012 and March 2017. 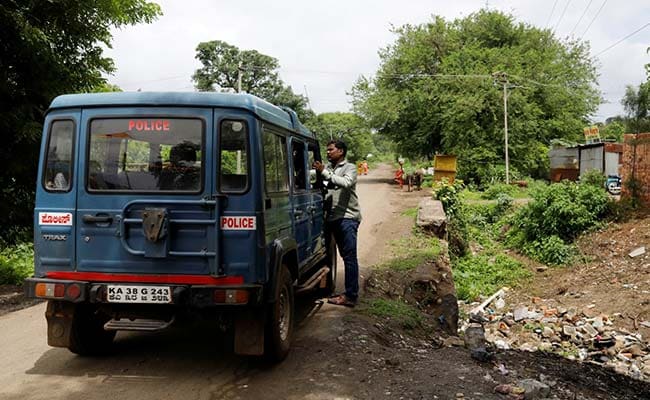 Villagers in Murki said they had been hearing about child kidnapping gangs for months. Photos and videos of the bodies of children being mutilated by alleged child abductors have been circulating via WhatsApp in many parts of India. Police showed Reuters some of the material they have gathered.

One video purports to show the bloodied body of a boy with his mouth gagged, as a man leans in and repeatedly stabs his heart. The messages exhort viewers to share them, "High Alert. Please Share As Much as Possible," one said.

In all the areas where the recent lynching cases occurred, there were no such gangs, and the messages and reports were all false, police said.

The problem is that people "may not be able to read or write, but everyone understands photos and videos," said Telangana Superintendent Rajeshwari.

The Home Ministry issued a notice to police nationwide on July 4, calling lynchings over child kidnapping rumours "a serious concern," according to a copy reviewed by Reuters. The government also issued a statement on Wednesday urging action against "cow vigilantes".

Mr Azam's killing has sent a chill through Murki, where many fear discussing the attack following the arrest of more than 30 men and women from the area in the police investigation. No one has yet been charged.

When asked why villagers attacked the men, Vijay Biradar, a village elder, said "people made a mistake."

"Did you see the Qatari's face? His big beard?" he said. "He looked like a terrorist."