"We Pleaded, They Were Determined": Cop On Mob-Killing Of Hyderabad Man 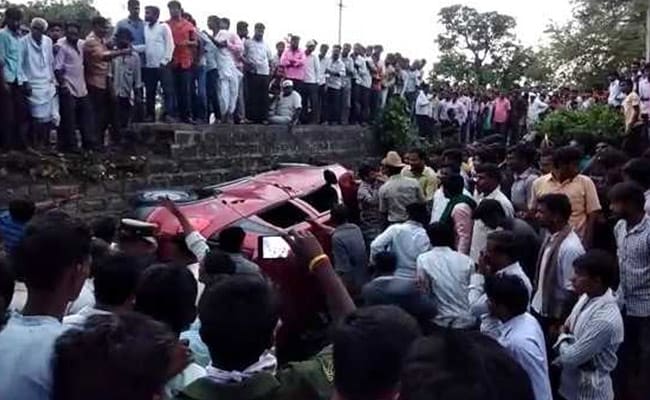 As the mob surrounded the car and thrashed Azam, the police did not open fire to prevent any escalation.

The image of a policeman in Karnataka's Bidar pleading with a 2000-strong mob to spare the lives of three men who they suspected were child kidnappers contrasts the viral photograph from Uttar Pradesh's Hapur.

The photograph from last month showed a man beaten by a mob over cow slaughter rumours being dragged by locals in the presence of cops.

However, the cops, including Circle inspector Dileep Sagar, who witnessed the killing of 32-year-old Mohammad Azam in Bidar last week, hugely regret not being able to stop the blood-thirsty mob.

Witnesses to the rumour-driven incident say the cops showed exemplary courage and patience in difficult circumstances and managed to save Azam's two friends.

Mohammad Azam, a UK-educated Accenture employee, and his friends from Hyderabad had driven to a village in Bidar for picnic. When they stopped to share chocolates with children, villagers assumed they were kidnappers.

"That is when three men started deflating our car's tyres. Soon a crowd gathered and started screaming we were child lifters. My uncle came and explained to them that I was related to him and we weren't kidnappers, but they didn't listen," Afroz, one of the survivors, told NDTV.

Sensing danger, they got into the car and sped off. The villagers in Murki had been told the men in the "gleaming new red car with no registration number" were fleeing with children. They used a fallen tree to stop their vehicle. The car hit it and toppled into a ditch.

The villagers then surrounded the car and attacked from all sides. Mohammad Azam was then dragged out of the car, kicked, beaten with stones and sticks.

The cops arrived in about 15 minutes.

Inspector Sagar, 46, pleaded with the mob to spare Mohammed Azam and his two friends.

An eyewitness, Govind from Murki, said several villagers, too, tried to stop the attack. "The police tried hard to help, but there were only four or five policemen against some 2,000 villagers.''

Rajkumar Patil, head of Murki village, added, "The mood of public was such that they did not listen even to the police. The inspector and his deputy literally fell at their feet, but they wouldn't listen. Azam's hands were tied and he was pulled out of the car in their presence and dragged. He died on the way to hospital."

Inspector Sagar told NDTV that the police did not open fire to prevent any escalation. More police personnel from Aurad and Bidar headquarters joined them.

It was only after the district police chief arrived and the accused were ready to be shifted vehicles that the police brought the two men out of the car.

"It was like they were determined to hurt them. They threw stones at the car. We had secured the car. Salman and Salham, Azam's friends, were safe. It took 10 minutes to put them in the jeep, but the mob didn't allow us to take them. The fact that the police was at the spot didn't stop them. This is the first time something like this happened," Mr Sagar said.

Nine policemen were injured in the incident.