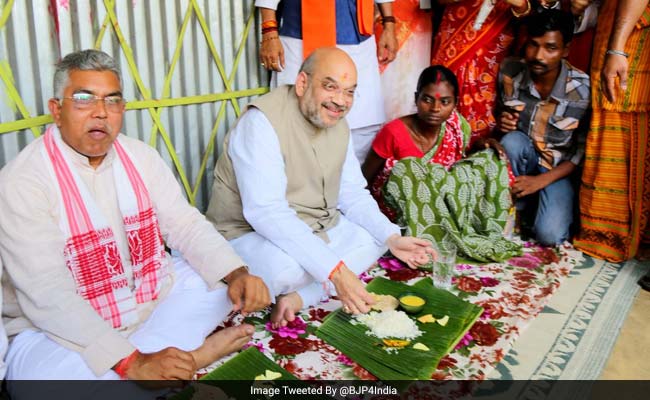 Kolkata: The Bhartiya Janta Party (BJP) today held protests in various parts of West Bengal accusing the Trinamool Congress of "kidnapping and forcing" the Naxalbari tribal couple, who had hosted BJP president Amit Shah during his recent visit, to join the TMC.

The activists of Bharatiya Janata Yuva Morcha and the BJP organized protest rallies and meetings in Kolkata, Naxalbari, Siliguri and districts of of north and south 24 Parganas.

They accused the TMC of "kidnapping" the Mahali couple who had served lunch to the BJP chief during his visit to the area in north Bengal on April 25 last.

The BJP also alleged that the couple was "forced" to join the TMC, a charge which was, however, rejected by the duo--Raju Mahali and his wife Geeta, "The kidnapping of the Mahali family and forcing them to join the TMC only shows that the TMC is afraid about the growth of BJP and that is why they are behaving in such a way.

Such kind of heinous act is a reflection of a dirty, vindictive mentality, which TMC represents," BJP state president Dilip Ghosh said, while addressing a protest rally in Kolkata.

A war of words has started between the BJP and TMC on the issue with Union minister Ravi Shankar Prasad calling it a "textbook case of revenge politics" which drew sharp reactions from the TMC which asked Prasad "to maintain dignity of the office he holds".

"I am here to meet the family members as we are concerned about their security. If TMC can carry out such a heinous act in north Bengal, then they can repeat it in Bhawanipore, Kolkata. But TMC should remember one thing- you can force someone to join your party, but you can't force someone to vote for you," Mr Chatterjee said.