Before Calling Off Pakistan Talks, a Warning Issued Over the Phone 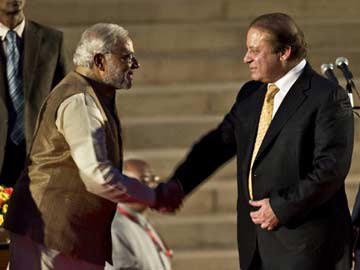 New Delhi: Prime Minister Narendra Modi's invitation to his Pakistani counterpart Nawaz Sharif to his swearing-in ceremony in May was seen by many as a welcome signal of a possible new cooperation between the neighbours.

Mr Sharif had praised Mr Modi's "impressive victory." At their summit, on Mr Modi's first day in his new office, the Prime Minister delivered a blunt warning, asking Islamabad to ensure it must prevent militants from attacking India.

Despite the directness of his message, both sides said the meeting was cordial. It was announced later that Foreign Secretary Sujatha Singh would travel to meet her counterpart in Islamabad in August.

In the past few weeks, amid an array of incursions by Pakistan along the Line of Control in Kashmir, the Opposition Congress dared the PM to explain his silence on the issue. After all, the Congress said, Mr Modi, before he was elected, had attacked the previous government led by Dr Manmohan Singh for being too soft on Pakistan; Mr Modi, projected as a hardliner on issues of national security, stood exposed, the Opposition alleged.

Last week, during his second visit to Jammu and Kashmir in as many months, Mr Modi accused Pakistan of staging "a proxy war" by sending militants to attack India. "The neighbouring country has lost the strength to fight a conventional war but continues to engage in the proxy war of terrorism," the PM told officers and men from the Army and Air Force in Leh.

Despite that, next week's talks for the Foreign Secretaries in Islamabad remained unhindered.

Till the Pakistani High Commissioner to India, Abdul Basit, decided yesterday to invite Kashmiri separatists to Delhi for "consultations". Foreign Secretary Sujatha Singh phoned Mr Basit to warn that he had a choice - "talk to separatists or talk to us," recounted Syed Akbaruddin, the spokesperson for the Foreign Ministry today.

Promoted
Listen to the latest songs, only on JioSaavn.com
It was only after that meeting ended, that India announced the talks were off, stressed Mr Akbaruddin.