'Barriers Have Turned into Bridges' Says PM Modi in Canada 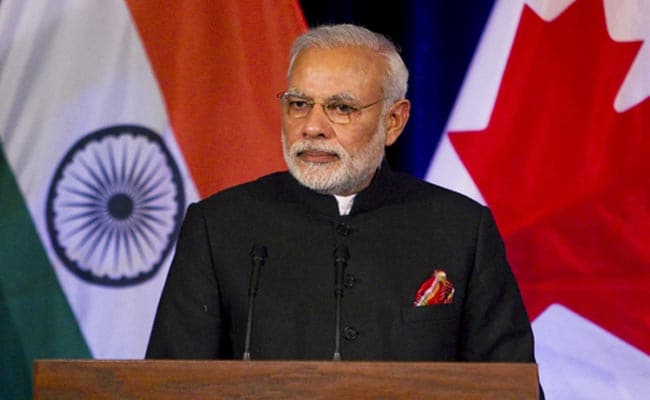 Prime Minister Narendra Modi speaks to a crowd during a dinner hosted by his Canadian counterpart Harper in Vancouver, British Columbia April 16, 2015. (Reuters)

Vancouver: Winding up his visit to Canada, Prime Minister Narendra Modi today said it was a historic trip
that will herald a new era of cooperation between the two countries as he promised an early conclusion of a free trade agreement and a bilateral investment protection pact.

"The importance of a visit is not measured by length but by the objectives...this was a historic visit, not because an Indian Prime Minister is visiting here after 42 years but because after 42 years, the clouds of distance have gone away in a moment," PM Modi said at a reception hosted in his honour by his Canadian counterpart Stephen Harper.

He said he considers this visit successful also because it helped bring back on track the ties which had strayed away.

"The wall will now be converted into a bridge," said PM Modi.

"India and Canada will be together in thoughts, will move together and work together," PM Modi said.

"We made progress in....BIPPA or Bilateral Investment Promotion and Protection Agreement and CECA or Comprehensive Economic Co-operation Agreement will be concluded soon. I am confident," said PM Modi who held wide-ranging talks with Canadian PM Harper on Wednesday during his three-day visit to this country.

PM Modi also talked about the immense cooperation possibilities between India and Canada.

Stressing that if Canada participates India's development it will benefit, PM Modi said it will also have the satisfaction of contributing to development of one-sixth of humanity.

Promoted
Listen to the latest songs, only on JioSaavn.com
PM Harper also praised the Indian community's contribution to Canada.