22 people were reportedly killed and 19 injured after a bus collided with a truck near Bareilly bypass on National Highway 24, later bursting into flames. 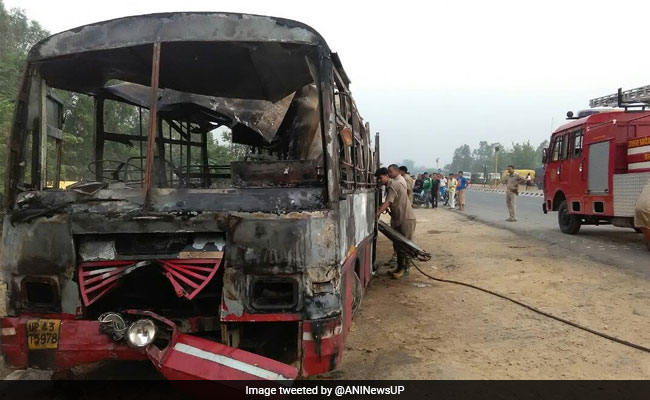 Bareilly: Prime Minister Narendra Modi today announced a compensation of Rs 2 lakhs from Prime Minister's National Relief Fund or PMNRF for the next of kin of those killed in Uttar Pradesh's Bareilly road accident. He also said that Rs 50,000 will be given to those seriously injured in the accident. Last night, 22 people were reportedly killed and 19 injured after a bus collided with a truck near Bareilly bypass on National Highway 24, later bursting into flames. Expressing sorrow, PM Modi later tweeted:

The bus accident in UP's Bareilly is heart-rending. I condole the loss of lives. I pray that those injured recover at the earliest: PM

Bodies recovered from the accident site were charred, with authorities unable to identify a single person.

"Around 5.45 am, we received 22 dead bodies from the bus accident site. The bodies are charred beyond recognition. It is difficult to even determine the gender of the people," said Dr Shailesh Ranjan of the Bareilly district hospital.

The bus, travelling to Gonda district from New Delhi, collided head-on with a truck. Immediately after, the diesel tank of the bus burst into flames, leading to a fire.

It took fire engines over 90 minutes to reach the spot, suggest eyewitness reports.

Senior Superintendent of Police Jogendra Kumar said, "The accident involving a bus of UPSRTC and a truck took place between 1.00 am and 1.30 am. 22 passengers of the bus died, while 15 sustained injuries. Six passengers are critically injured and have been hospitalised," reported the Press Trust of India.