Riteish Deshmukh and Vivek Oberoi came up with an unique promotional strategy for their upcoming film Bank Chor, in which they play chor and police, respectively 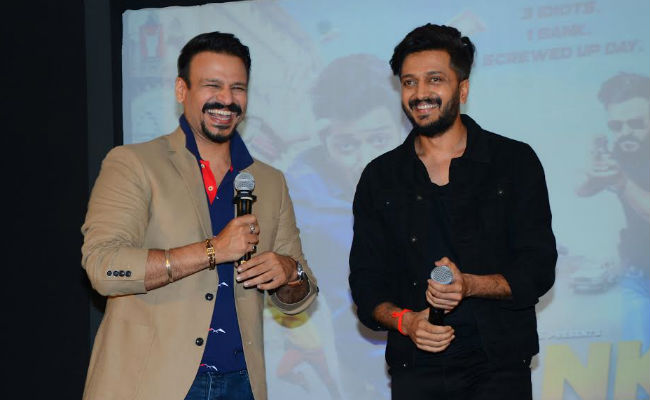 New Delhi: Actors Riteish Deshmukh and Vivek Oberoi came up with an unique promotional strategy for their upcoming film Bank Chor, in which they play chor and police, respectively. The plan was to roast Riteish, who was sitting with the audience at the launch of the film's trailer in Mumbai on Tuesday. Video of the roast has gone very viral since being made available online. Vivek and Riteish have also co-starred in the Masti series. As the event started, Vivek introduced his co-star on stage as "Y Films ka poor choice and gareebon ka Riteish Deshmukh." Bank Chor is bankrolled by Yash Raj Film's subsidy Y-Films. Of Riteish's stint in Bollywood, Vivek said that he got admission in the industry though 'Marathi quota'. To which, Riteish hilariously replied, "Yes." Riteish Deshmukh is the son of late politician Vilasrao Deshmukh and has produced Marathi films such as Balak Palak and Lal Bhari. Apart from Vivek and Riteish, Bank Chor also stars Rhea Chakraborty, who was also present at the event.

Vivek Oberoi added that Riteish Deshmukh used to be an architect earlier and later he realised that the profession is not meant for him. Of Riteish's films choices, Vivek said, "The only film that describes Riteish's career is Darna Zaroori Hai." Watch the video here:
As a part of Bank Chor's promotional strategy, Riteish Deshmukh has been spoofing posters of Salman Khan's Tubelight and Aamir Khan's Dangal. He morphed the pictures of the lead actors with his own. Riteish leads a team of inept robbers on a heist in Bank Chor.

Check out the spoofed posters here:

This poster of Riteish as Begum Jaan is major ROFL.

Here's the trailer of Bank Chor:

Promoted
Listen to the latest songs, only on JioSaavn.com
Vivek Oberoi plays the cop tasked with bringing Riteish and team in. Rhea stars as a news reporter. Two songs of the film have been unveiled so far, one of which is rapped by Baba Sehgal who also has a cameo.

Bank Chor has been directed by Bumpy. The film is scheduled to release in theatres on June 16.