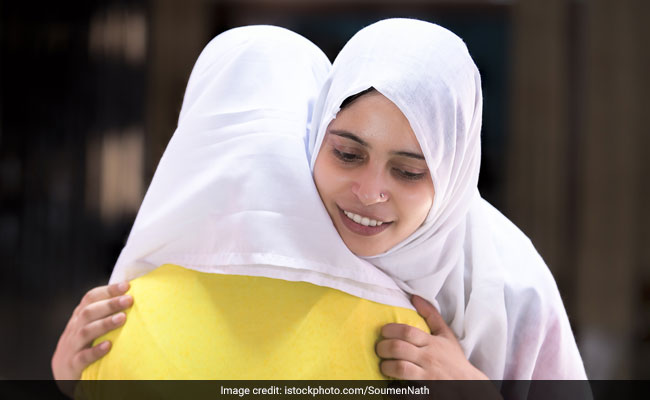 On Bakrid, Muslims head to a mosque for prayers, after which they hug and wish each other, Eid Mubarak

Lucknow: Leading clerics in Uttar Pradesh has asked Muslims to skip the traditional hug after offering Eid prayers today over worries that the embrace and handshakes could spread swine flu. 66 of the state's 75 districts have reported a record 2,300 cases of the H1N1 virus this year. This is the first time that such a large number has been reported from Uttar Pradesh. It has already cost 53 lives.

H1N1 virus is a highly contagious strain of an influenza virus that originated in pigs, first made headlines in 2009 when it was first discovered in humans and has since then, affected millions across the world. In India, it has already killed over 1250 people this year.

Muslims make up for a fifth of Uttar Pradesh's 20 crore population, and Bakrid is one festival when most of them would head to a mosque for Eid prayers.

"After the prayers, they would hug each other and shake hands. Because this would increase the risk of infection, we are asking people not to hug or shake hands," the cleric, who is also member of the All India Muslim Personal Law Board, said.

"It would be such a shame if a festival helps the infection spread, and people losing their lives," he said.

There is no uniform practice around the world on how Muslims greet each other after the Eid prayers. In some places such as in South Asia, people embrace each other three times. In the Gulf countries, it is substituted by kissing on the nose or cheeks.

Promoted
Listen to the latest songs, only on JioSaavn.com
But community leaders agree it is going to be a challenge to get Muslims to stop the traditional embraces today. It might even be awkward.

"Maybe," said a leading Shia cleric Maulana Kalbe Jawwad, "it would help to prevent the infection from spreading if people wore masks". Eid is identified too much with the embraces, he said, calling it an opportunity for people to put their differences behind them. "But yes, life is too precious so possibly it will be better to use masks".