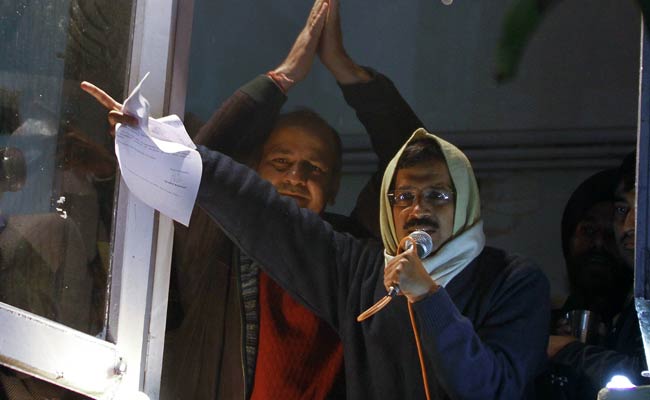 Arvind Kejriwal's move to table the anti-graft Jan Lokpal Bill in the Delhi legislature was rejected.

New Delhi: Less than two months after Arvind Kejriwal rode the metro to take his oath as Delhi's Chief Minister in a large park packed with tens of thousands of people, the man who delivered a seismic shift in Indian politics has shaken things up again. By quitting. (10 latest developments) | (Live updates)

He has resigned after his push for the anti-corruption Jan Lokpal Bill was blocked in the state legislature by law-makers from the Congress and the BJP.

"They know that if this law is brought in, their leaders will end up in jail," Mr Kejriwal said to a cheering group of supporters at his party office this evening. His trademark muffler was wrapped around his head. (Amid talk of Kejriwal's resignation, a growing crowd at AAP office)

Earlier, in the raucous Delhi Assembly, he declared, "I will give up the chief minister's office not once but 1000 times to fight against corruption."

The legislators from the Congress and BJP who voted today to prevent him from tabling the Jan Lokpal Bill say they support the proposal, but cannot ignore the fact that it has been vetoed by Delhi's constitutional head, Lieutenant Governor Najeeb Jung. The chief minister had firmly rejected the opinion that before it is presented for review in the legislature, the bill must be vetted by the Lieutenant Governor as a representative of the centre. (Read: Kejriwal's family watches as Congress, BJP launch attack)

The Jan Lokpal Bill has been described by Mr Kejriwal as the raison d'etre of his Aam Aadmi Party, which was set up a little over a year ago. The party and its leaders said their mission was to cleanse the polity of deep-rooted graft and self-serving officers.

Other parties dismissed AAP as an upstart that had neither the experience nor the vision to offer governance.

Promoted
Listen to the latest songs, only on JioSaavn.com
In December, Delhi voters pointedly disagreed. In the first election it contested, AAP delivered a result of astonishing proportions, placing second. The Congress, decimated to third place, offered its support to AAP which then formed a minority government.

AAP leaders have warned that they have no interest in power; they have repeatedly disowned the Congress as an ally, frequently describing its union ministers as "India's Most Corrupt."  Earlier this week, Mr Kejriwal ordered a criminal investigation against Union Oil Minister Veerappa Moily for allegedly colluding with India's richest man, Mukesh Ambani, to inflate gas prices.