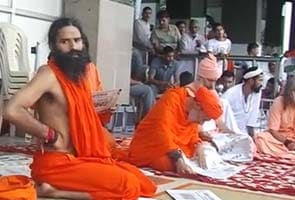 Claiming that shivirs (camps) undertaken by Patanjali Yoga Peeth and Divya Yoga Trust in Haridwar were commercial activity, the Revenue department has raised a demand of Rs 5.14 crore payable on fees collected from individuals for learning Yoga, officials said.

"The Directorate General of Central Excise Intelligence has sent notices for alleged service tax evasion to the tune of Rs 5.14 crore late last month. The demands have been raised for its assessment for period between 2007-08 and 2011-12," a Finance Ministry official said.

When contacted, Baba Ramdev's spokesperson SK Tijarawala said the trusts and its activities like conducting yoga shivirs are exempted from service tax net as they are doing charitable activities for medical relief.

"Trusts' activities are barred from service tax as it is for the purpose for providing medical relief to poor. We do not have anything to hide," he contended.

According to the Finance Ministry official, the notices were issued late last month after it found substantial documentary evidence that the trusts were avoiding service tax by conducting semi and fully residential yoga camps and calling them charitable in nature and thus claiming exemption.

"The trusts were taking donations from participants of yoga shivirs. They were also conducting a residential yoga camps through Swami Shankardev Vanprastha Asharam scheme," the official said.

The notices, issued to the trusts, also mentioned that the Finance Ministry is in the process of cancelling the Income Tax exemption status given to Baba Ramdev trusts.

Thousands of people participate in the yoga camps conducted across the country by Baba Ramdev and trusts managed by him.

The yoga guru, who is leading a campaign against black money in the country, also manages trusts which manufactures and sells ayurvedic medicines in India and abroad.