The air ambulance flight headed for Mumbai lost a wheel while taking off from the Nagpur airport on Thursday. It safely belly-landed at the Mumbai airport on a foam carpet later, said officials. 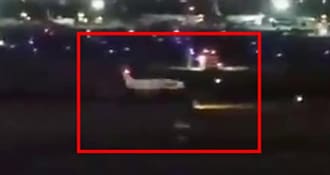 Aviation regulator DGCA will conduct an audit of Jet Serve Aviation Private Limited whose aircraft belly-landed at the Mumbai airport after losing one of its wheels, officials said on Friday.

The air ambulance flight headed for Mumbai lost a wheel while taking off from the Nagpur airport on Thursday. It safely belly-landed at the Mumbai airport on a foam carpet later, they said.

A foam carpet is created on a runway by spreading foam using fire extinguishers so that a plane does not catch fire during an emergency landing.

The officials said the company, Jet Serve Aviation, will undergo a full audit to understand the cause of this incident.

Based in Gurgaon, Jet Serve Aviation provides maintenance, repair and overhaul services along with charter flights.

Civil Aviation Minister Hardeep Singh Puri had on Thursday tweeted about the incident.

"A Jet Serve ambulance with a patient onboard lost a wheel during takeoff from Nagpur. Showing immense presence of mind Capt Kesari Singh belly landed the aircraft on foam carpeting in Mumbai," he said.

"All onboard are safe. Commendable effort by DGCA (Directorate General of Civil Aviation), CSMIA (Chhatrapati Shivaji Maharaj International Airport in Mumbai) and other agencies," he added.

In a detailed statement, the Chhatrapati Shivaji Maharaj International Airport (CSMIA) in Mumbai said a full emergency was declared for the non-scheduled Beechcraft VT-JIL aircraft en route from Nagpur to Mumbai.

"The flight carrying two crew members, one patient, a relative and one doctor did a belly-landing at CSMIA at 21:09 hrs," it noted.

The airport's emergency response team, including fire and rescue responders, follow-me vehicles, the CISF and medical teams among many others were activated instantly and put on standby to provide immediate assistance to ensure the safe evacuation of the passengers, it said.

"As a precautionary method, CSMIA also foamed RWY (runway) 27 in order to avoid the aircraft catching fire. All passengers were evacuated safely and flights operating in and out of CSMIA remain on schedule," the statement read.