Atal Bihari Vajpayee was admitted to AIIMS on June 11 with a urinary tract infection and chest congestion.

Atal Bihari Vajpayee, three-time Prime Minister of India and one of the country's most respected politicians, has died. The announcement was made by the All India Institute of Medical Sciences or AIIMS, where the 93-year-old was being treated by a team of doctors for nine weeks.

The centre has announced a seven-day mourning throughout India and state funeral for the former prime minister at Smriti Sthal in the national capital. The funeral will take place today afternoon, around 4 pm.

Several state governments including Delhi, Bihar, Uttar Pradesh, Madhya Pradesh Punjab and Uttarakhand have announced a holiday on Friday as a mark of respect to Atal Bihari Vajpayee.

Mr Vajpayee, the BJP's tallest leader, was admitted to hospital on June 11 with a urinary tract infection and chest congestion.

Prime Minister Narendra Modi visited the hospital twice in 24 hours and top politicians from across parties arrived as the former prime minister's health worsened on Wednesday. 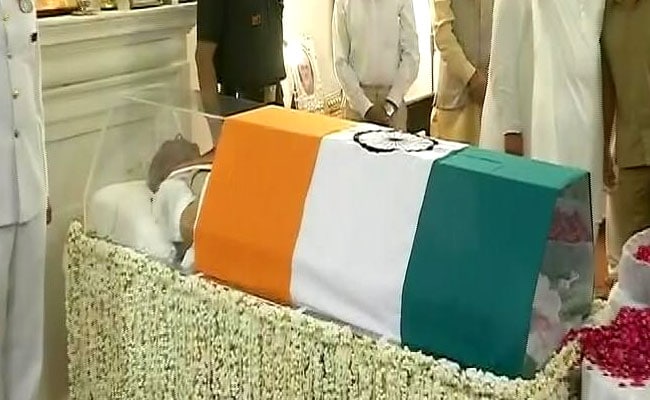 A state funeral would be accorded to Atal Bihari Vajpayee.

"Unfortunately, his condition deteriorated over the last 36 hours and he was put on life support systems. Despite the best of efforts, we have lost him today," the statement by AIIMS said.

"He lived for the nation and served it assiduously for decades," PM Modi tweeted soon after, calling his death as "end of an era".

The BJP patriarch had announced his retirement from electoral politics at a public meeting in Mumbai back in 2005. It wasn't a surprise to many. He had not been keeping well.

Since 2009, the veteran politician had largely been confined to his home on Krishna Menon Marg in the heart of Delhi, away from public life due to his failing health.

Atal Bihari Vajpayee was considered the gold standard of leadership in the BJP and had admirers even among rival parties. His birthday -- December 25 -- is celebrated as Good Governance Day.

Since morning, BJP chief Amit Shah and Union ministers Rajnath Singh, JP Nadda and Venkaiah Naidu and several other leaders had been visiting the hospital.

At the BJP headquarters in Delhi, decorations put up for Independence Day celebrations on Wednesday were taken down as a somber note took over.

LK Advani, one of Mr Vajpayee's closest colleagues and his deputy in the NDA government from 1998 to 2004, was among the visitors.

"To me, Atalji was more than a senior colleague- in fact he was my closest friend for over 65 year," Mr Advani later said in a statement.