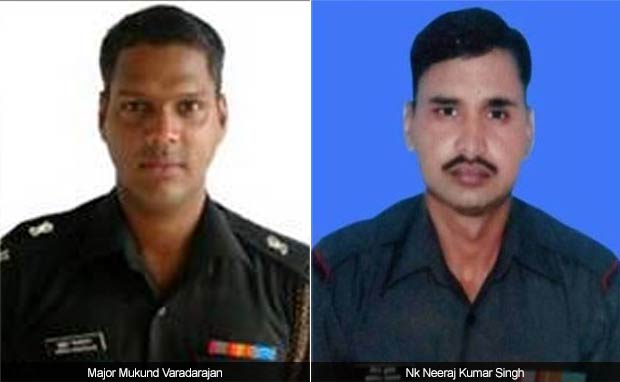 Major Varadarajan of the army's 44 Rashtriya Rifles died in April last year, in heavy firing by terrorists who were hiding in a village in Shopian in Jammu and Kashmir. The 31-year-old officer managed to kill three terrorists before dying.

The father of a three-year-old, Major Varadarajan has been commended for showing "exemplary leadership skills, raw courage and swift action." His wife Indu Mukund received the award from President Pranab Mukherjee today.

Naik Neeraj Kumar Singh, also from Rashtriya Rifles, was killed while he was leading a search operation at Kupwara in Jammu & Kashmir in August. He rescued an injured soldier and shot dead one of the terrorists. He refused to be moved to safety until he fell unconscious.

"Despite serious injuries, displaying unparalleled courage, he killed another terrorist in hand-to-hand combat," reads his citation, which was handed over to his wife Parmeshwari Devi.

Two naval officers who died on board the INS Sindhuratna while trying to save fellow sailors are among the 12 who have been awarded the Shaurya Chakra.

Promoted
Listen to the latest songs, only on JioSaavn.com
Lt Cdr Manoranjan Kumar and Lt Cdr Kapish Singh Muwal were last seen alive fighting fire and smoke in a compartment in their submarine, from where they evacuated 13 sailors. They stayed behind and tried to prevent the spread of the fire, saving the lives of over 90 crew members before they died.

Among others awarded the Shaurya Chakra are Wing Commander Huvey Upadhyaya of the Indian Air Force, who flew his helicopter in treacherous weather conditions to look for a missing chopper that had crashed in Siachen, the world's highest battlefield. He landed his plane in soft snow, amid strong winds near the crash site at an altitude of 17,600 feet, saving the lives of two Army pilots.