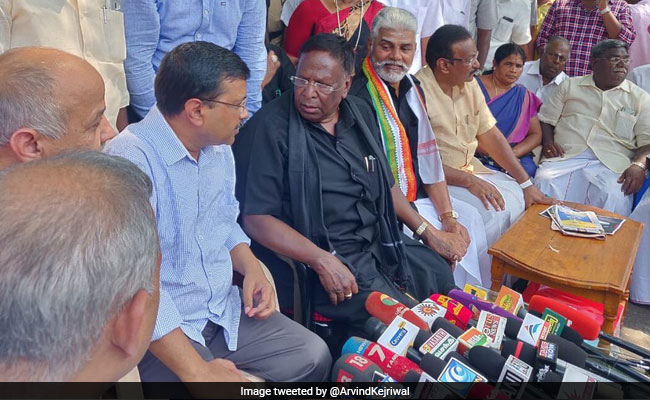 Delhi Chief Minister Arvind Kejriwal - known for his many battles with Lieutenant Governors of Delhi - on Monday met his Puducherry counter V Narayansamy, who was on a protest against Lieutenant Governor Kiran Bedi. The meeting, Mr Kejriwal underscored, was not a political one, it was rather to discuss the "fight for complete statehood" that Delhi and Puducherry must have.

"It is extremely important to express solidarity Narayansamy. Kiran Bedi is not allowing an elected government to run. She is trampling on the Constitution and democracy," Mr Kejriwal told NDTV.

Mr Narayansamy was on a sit-down protest outside the Raj Bhavan for the last six days, waiting for Kiran Bedi's approval for his government's proposals on welfare schemes and administrative matters. Ms Bedi has termed his protest "illegal".

Late on Monday night, Mr Narayansamy temporarily ended his protest after Ms Bedi agreed to his demands of delegating financial powers to the Chief Minister from April 1, as advised by the centre.

The Dharna by HCM outside RajNivas is over. The HCM, Council Of Ministers, CS and Secretaries,met.
It helped clarify and consolidate issues. Am happy Puducherry Government will return to work tom morning. So will the road to RajNivas be open for visitors to come to RajNivas.

"This is not democracy. Chief Ministers sitting on dharna has become the norm. Lieutenant Governors in Puducherry and Delhi have been appointed with a mandate to not let these governments run," said Mr Kejriwal, who was on a nine-day dharna last year at the waiting room at Lieutenant Governor Anil Baijal in Delhi.

Mr Kejriwal said full statehood should be granted to Puducherry and Delhi, union territories where the powers of the elected Chief Ministers are curtailed by Lieutenant Governors appointed by the central government. Mr Kejriwal contends that through them, the centre tends to rule by proxy.

The reference was to the BJP's defeat in Delhi, when they fielded the former top cop as the party's candidate for Chief Minister's post. In the same assembly elections of 2015, Mr Kejriwal's Aam Aadmi Party had swept to power, winning 67 of Delhi's 70 assembly seats.