The Indian Army said Larsen and Toubro (L&T) has supplied 100 units of indigenously made K-9 Vajra-T 155 mm/ 52 calibre self-propelled guns to it so far. 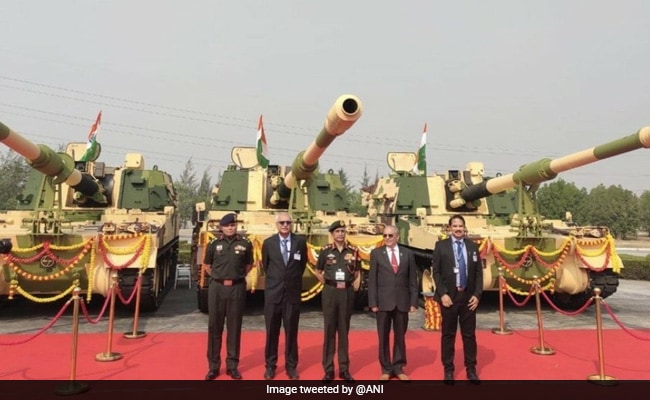 Chief of Army Staff Gen MM Naravane on Thursday flagged off the 100th K-9 Vajra tracked self-propelled howitzer from a production facility of its maker Larsen and Toubro at Hazira near Surat.

The Indian Army said Larsen and Toubro (L&T) has supplied 100 units of indigenously made K-9 Vajra-T 155 mm/ 52 calibre self-propelled guns to it so far.

In a statement, L&T said with the flagging-off of the 100th howitzer, the company has successfully completed delivery of all guns under the existing contract awarded to it by the Ministry of Defence in May 2017.

The company said it has maintained its track record of "ahead of time deliveries" of complex platforms.

As a part of its 'Make-in-India' initiative, the company established a green-field manufacturing-cum-integration and testing facility at its Hazira manufacturing complex near Surat to produce the guns.

The 'Armoured Systems Complex' at Hazira was dedicated to the nation by Prime Minister Narendra Modi in January 2018.

L&T Defence produced the 'K9 VAJRA' under a contract awarded to it through global competitive bidding. L&T was the prime bidder for the programme with South Korean defence major Hanwha Defence, the original equipment maker of the world's top rated howitzer the 'K9 Thunder', as its technology partner.

"With the experience, track-record, skills, capabilities and infrastructure that L&T has built, we are ready to indigenously develop, and build India's future capabilities," he said.

Mr Patil said with the supply of 100th K9 VAJRA howitzer, L&T have created an industry benchmark by delivering the only in-service equipment of its class, a major land-based programme ahead of schedule.

"We hope and believe that under the Aatmanirbhar Bharat policies of the Government of India, the national asset created in the form of the Armoured Systems Complex to execute this ambitious contract, will provide sustenance to the painstakingly built supply chain of more than 1000 MSME partners," he said.

It said the project involved local production of over 13,000 components per system through a supply chain spread across the states of Gujarat, Maharashtra, Karnataka and Tamil Nadu.