"On arrival at the Corps headquarters in Dimapur, the Army Chief was briefed by Lt Gen Johnson Mathew, General Officer Commanding of Spear Corps and the Division Commanders on the prevailing situation and operational preparedness along the Northern borders," the Army said. 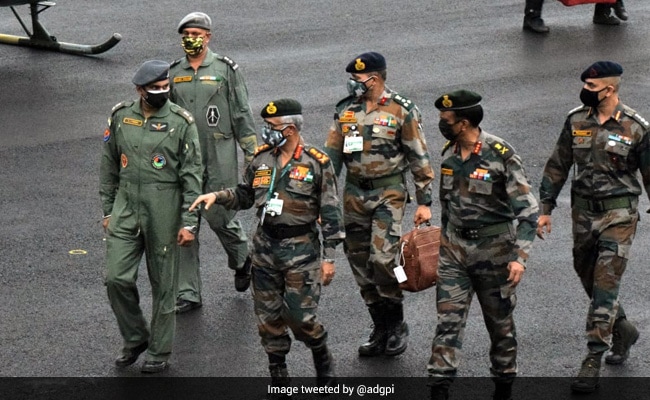 Army Chief Gen MM Naravane reviewed India's operational readiness along the boundary with China in the Arunachal Pradesh sector during a two-day visit to the Northeastern region that began on Thursday.

His visit to the region came amid the Indian Army's continued standoff with the Chinese military in some of the friction points in eastern Ladakh.

Officials said Gen Naravane arrived at Dimapur in Nagaland on Thursday to review the operational readiness along the Northern borders of Arunachal Pradesh and the security situation in the hinterland in the Northeastern region.

"On arrival at the Corps headquarters in Dimapur, the Army Chief was briefed by Lt Gen Johnson Mathew, General Officer Commanding of Spear Corps and the Division Commanders on the prevailing situation and operational preparedness along the Northern borders," the Army said.

It said the Chief of Army Staff complimented all ranks for maintaining excellent vigil and exhorted them to stay alert and keep watch on activities along the Line of Actual Control (LAC).

On Friday, Gen Naravane reviewed the security situation in the hinterland of the North East and along the India-Myanmar borders and exhorted all the personnel to keep working with the same zeal and enthusiasm.

Two days ago, the Chief of Army Staff had said that the Army will maintain an enhanced presence on the entire northern front from Ladakh to Arunachal Pradesh till "de-escalation" is achieved.

In view of the border row with China in eastern Ladakh, the Army last year significantly ramped up deployment of troops in all sensitive areas along the nearly 3,500-km-long Line of Actual Control (LAC) including in the Sikkim and Arunachal sectors

The Indian Air Force (IAF) also deployed additional fighter jets and attack helicopters in key bases looking after the airspace along the LAC in the Arunachal sector.

India and China were locked in a military standoff at multiple friction points in eastern Ladakh since early May last year but they have completed the withdrawal of troops and weapons from the North and South banks of Pangong lake in February following a series of military and diplomatic talks.

External Affairs Minister S Jaishankar on Thursday said the relationship between India and China is at a crossroads and its direction depends on whether the neighbouring country adheres to various agreements on maintaining peace and tranquillity along the border.

"I think the relationship is at a crossroads and which direction we go depends on whether the Chinese side would adhere to the consensus; whether it would follow through on the agreements which we both have done... What is very clear in the last year is that border tensions cannot continue with cooperation in other areas," he said.