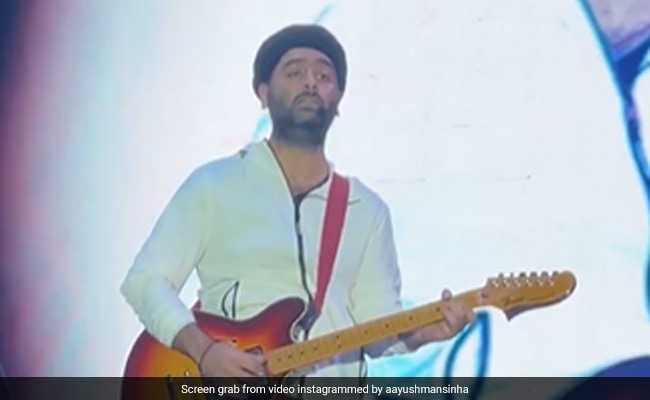 Music has the power to transcend borders and touch people's lives. A song that tugged at the heartstrings was Coke Studio's Pasoori. Sung by Pakistani artists Ali Sethi and Shae Gill, the track was one of the most trending songs in India. Now, the hit Pakistani number was crooned by singer Arijit Singh during a Mumbai concert and the video has left everyone mesmerised.

The singer performed in Mumbai as part of his 'One Night Only' tour, which was held at Jio World Garden. The video of his recent gig is going viral on the internet. His rendition of Pasoori has left everyone stunned.

Posted by Aayushman Sinha on Instagram, the video shows Arijit Singh crooning Pasoori in his soothing voice. The caption of the video read, "Surreal night, surreal vibe! @arijitsingh has possibly the biggest catalogue of hits but he still makes it a point to cover music he loves and appreciates! #Pasoori has a new rendition and boy is it beautiful!"

The spellbound audience continued to sway to the tunes of the song.

The video has amassed more than 4 lakh views on Instagram and the internet loved the beautiful rendition by the singer. A user wrote, "King nails everything he sings." Another commented, "Absolutely surreal I was there and it was so good I cried."

The third user wrote, "Arijit Singh name is enough. He is a living legend." "Unreal & Effortless," the fourth expressed.

The song has become the internet's favourite, and the craze of Pasoori is far from over. There are different videos on social media where people can be seen singing the famous song and making the instrumental version of the same. These videos won millions of hearts all over the internet.