"Are You Saying All Brahmins Rich?": BJP Leader's Retort To DMK On Quota 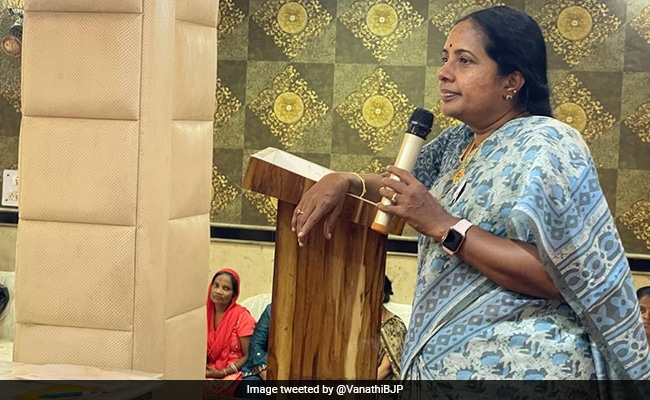 BJP national Mahila Morcha President and Coimbatore South MLA Vanathi Srinivasan on Saturday sought a White Paper on the number of persons who have secured higher education and also got government jobs from unreserved sections of the society in Tamil Nadu.

She was commenting on DMK Organising Secretary RS Bharathi's challenge to BJP asking the saffron party to release a list of the communities that are going to benefit from the 10 per cent reservation under the economically weaker sections (EWS) category, and alluded that the quota will only benefit a particular section.

The Supreme Court on November 7 upheld the 10 per cent quota for EWS in educational institutions and government jobs, saying it was not discriminatory and did not violate the basic structure of the Constitution.

Ms Srinivasan said DMK was trying to propagate hatred among society, as was done in the past by German dictator Adolf Hitler with the Jews, that only the Brahmin community was going to benefit from EWS quota.

In a statement, the BJP leader said those who were not covered under any reservation can benefit by the 10 per cent quota while Tamil Nadu already has 69 per cent reservation for SC/STs, BCs, MBCs, SC (Arundathiyar), and BC (Muslim).

Does RS Bharathi want to establish that only Brahmins are not covered under reservation, she asked the DMK leader.

Ms Srinivasan questioned whether RS Bharathi tried to deny this, or wanted that these communities do not require any reservation. "Are you saying that there no poor persons in these caste groups and that all of them are rich?" she asked the DMK leader.