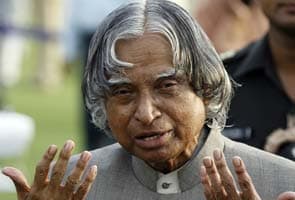 Speaking at the Beijing Forum 2012 in the Chinese capital, Mr Kalam said: "World Knowledge Platform for Global Action has to emerge as a network of universities, government agencies and private sector with a space for participation of policy makers, students, academia and entrepreneurs."

"It should focus on the solution path of identifying global problems, researching solutions in a multinational manner, delivering through local cooperation and enterprise based approach in the long term for sustainability," Mr Kalam told the Forum inaugural.

Mr Kalam said the proposed World Knowledge Platform for Global Action should be funded as an international cooperative venture with dedicated spending to develop customised and scalable solutions of global problems.

To free the world of conflicts, every nation should think "bigger than its people and bigger than the nation", he said.

"The basic foundation for achieving energy independence has to be built on the principles of environmental impact mitigation, selecting the right energy mix directly linked to the sustainable economic growth of the nation," Mr Kalam said, according to information received here.

"...About $1 billion over five years needs to be dedicated to the development of feasible and commercially viable solutions in this domain," he said.

The Beijing forum, which is in its eighth edition, has been approved by the Chinese ministry of education and is co-sponsored by Peking University, Beijing Municipal Commission of Education and Korea Foundation for Advanced Studies.