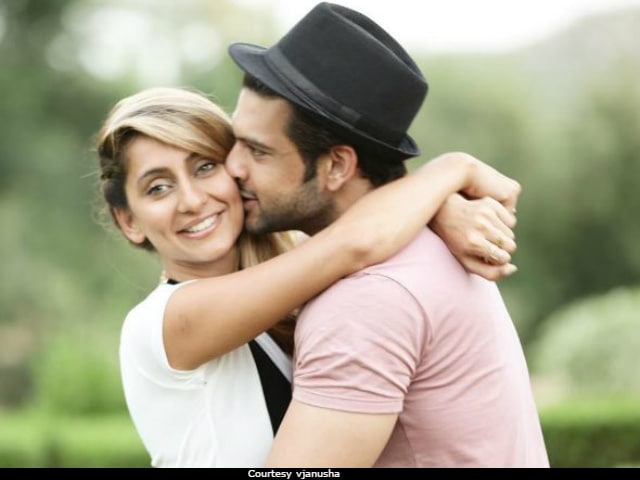 "Girls should have the freedom of wearing what they want," Karan Kundra wrote (courtesy vjanusha)

New Delhi: TV star Karan Kundra stood up to the haters of his girlfriend Anushka Dandekar, who was subjected to slut-shaming after she posted a photograph of herself in a crop top and shorts on Instagram. Anusha's caption reveals that the photo was to celebrate her body and the sense of liberation. After a flurry of rude messages and comments on her post, Karan slammed one particular follower in angry words and added: "Girls should have the freedom of wearing what they want, where they want, when they want, whatever time of the day. Instead of changing people's mentality in our society, you are telling a girl to curb how she should live. This is the hypocrisy of your society and you should be ashamed of yourself."

Anusha had shared the bold photograph with a strong message for body-shamers: "My body, my choice, my life, my karma... Free yourself from people's judgement, feel liberated, live with a kind heart and love yourself, or change till you do... For when you truly love yourself, you can truly love someone other than you." She also thanked Karan for encouraging her to stand up for her views.

My body, my choice, my life, my karma... Free yourself from people's judgement, feel liberated, live with a kind heart & love yourself, or change till you do... For when you truly love yourself, you can truly love someone other than you... Anusha Thankyou @kkundrra for giving me the confidence to post this... Thankyou baby Sash @sashajairam for shooting me like never before. Thankyou @shaazjungphotography for making it postable (new word)... Here goes nothing...

Meanwhile, model and TV personality Rochelle Rao also jumped into the debate and addressed a note to Anusha: "The world is in constant conspiracy against the brave (Anusha). It's the age old struggle; the roar of the crowd on one side, and the voice of your conscience on the other - Douglas MacArthur. So, keep listening to your conscience because it's telling you what's right. The world only accepts what doesn't threaten its peaceful sleepy state. You however my dear, are a "kindred spirit" all set to awake the sleeping and the dead to a life worth living."

Promoted
Listen to the latest songs, only on JioSaavn.com
Anushka's Instagram feed is currently being flooded with encouraging comments in support of the star couple - "Anusha always inspires girl empowerment. But guys like you are just another blessing for this step" - is the general sentiment being reflected.

Last year, Karan Kundra also featured in headlines after he shut down a female follower who trolled Anusha with insulting comments. Karan Kundra, 32, and VJ Anusha, 35, confirmed they are dating on Valentine's Day last year. They are currently co-hosting TV show MTV Love School, which is in its second season.