Anna video targets Congress as 'govt of the corrupt' 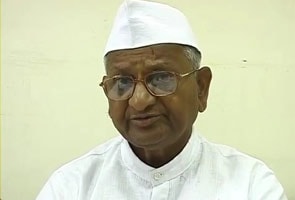 New Delhi: Anna Hazare has delivered on his threat to the Congress - that he will ask voters not to support the party because it has not introduced the new anti-corruption Lokpal Bill.

In a ten-minute CD titled "The Government of the Corrupt", the Gandhian says the Congress must be defeated. The CD will be distributed in Hisar in Haryana by activists of the India Against Corruption campaign.

Anna is not going to tour Hisar, which votes later this month in a by-election for the Lok Sabha.

Activists Arvind Kejriwal and Manish Sisodia, both close to Anna, will arrive in Hisar tomorrow and stay there till Monday, when campaigning ends. Former Union Minister Jai Prakash of the Congress, which is the ruling party in Haryana, is standing against Kuldeep Bishnoi, son of former Chief Minister Bhajan Lal, who was the area's MP till his recent death.

"If you do not vote for Congress today, then Congress will get a message that in the coming elections, they will not get votes if they do not bring Jan Lokpal Bill in the Winter Session of Parliament," Mr Kejriwal says in the video.

Promoted
Listen to the latest songs, only on JioSaavn.com
Anna and his team have told the government that if the Lokpal bill is not passed by parliament in the winter session, they will tour states headed for elections like Uttar Pradesh and campaign against the Congress.

The Lokpal refers to a new anti-corruption agency that will be created to investigate complaints of corruption among government officials. In August, Anna went on a 13-day fast to demand that Parliament consider three basic powers that he wants the Lokpal to have. Parliament passed a resolution accepting the three must-haves. They are now being studied by a parliamentary committee to ensure they do not violate any constitutional rights or features.
Comments
Anna HazareAnna Hazare CongressAnna Hazare election campaignHisar by-electionAnna Hazare Hisar