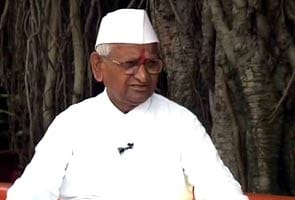 Pune: More than 80 per cent of the populace who supported Anna Hazare's campaign against corruption were the youth. The overwhelming support extended by the younger generations was not lost on Hazare, who has now decided to start a blog, Twitter and Facebook account. This he said would help him feel the pulse of the youth. The day and date of the launch of his new blog and Twitter shall be declared soon. Hazare, who has just passed Standard VII, is not worried about net technology.

"My voice has already reached the people through print and electronic media, and now, I shall try to get comfortable with Twitter and Facebook too," he said in his official letter issued from his village Ralegansiddhi. "My blog shall be used for my official stand on various issues, and no one can publish on the blog without my permission."

Sources close to Hazare said his presence on the Internet would also help repudiate rumours about him.

"It is difficult to make statements to each and every media. Anna's own version can be easily seen on the periodic blogs," said Jaising Mapari, Sarpanch of Ralegansiddhi.

Vijay Kuvlekar, chief information officer, Pune, and Raju Parulekar, noted journalist and political analyst, has taken the initiative to make the blog, Twitter and Facebook account for Hazare. "We take great pleasure in sending across Anna's decisions on his movement and non-violent revolution to people across the globe directly," said Parulekar.

Promoted
Listen to the latest songs, only on JioSaavn.com
"The blog and twitter is in Marathi, Hindi and English. If required the blog shall be translated in some other Indian and also world languages." Rahul Sadavarte, a first year college student, said, "Instead of reading newspaper, now I can easily access Anna on the net and also interact with him. My dream was to have a dialogue with Anna and it may be at least partly fulfilled by Facebook."