The second Oxygen Express is on its way to Guntur in Andhra Pradesh. Two other trains are on their way to Telangana, said the South Central Railway 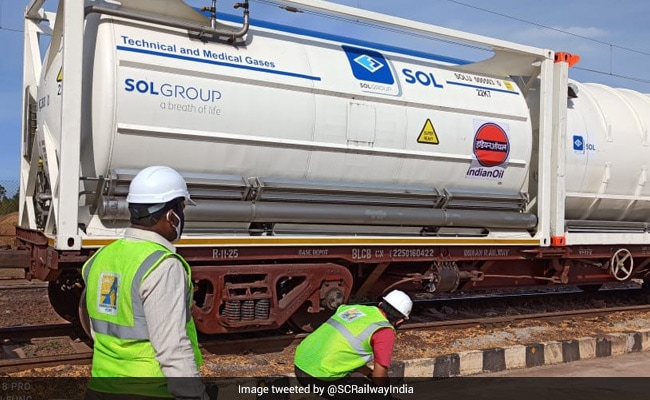 The Oxygen Express came through a green corridor at an average speed of 65 kmph, said the SCR

The first Oxygen Express for Andhra Pradesh on Saturday reached the Krishnapatnam Port in the State. The express, with two containers of 40 tonnes of liquid medical oxygen, reached the port while another is on its way, a press release from South Central Railway (SCR) said.

The SCR said two additional trains with a combined capacity of 140 tonnes are on their way to Telangana.

The train for Andhra was operated from Durgapur in West Bengal and covered a distance of nearly 1,650 kms in around 27 hours, the release said. The train came through the green corridor at an average speed of 65 kmph, it said.

The Oxygen Expresses are being operated by the Railways across the length and breadth of the country as per the request of the state governments.

Accordingly, Oxygen Expresses have been received in Telangana and Andhra, the release said.

Additionally, one more express with 76.39 tonnes is on its way to Guntur in Andhra Pradesh,

Gajanan Mallya, General Manager, SCR, said the Railways are operating the expresses to provide safe and fast transportation to meet the gas requirements of the states.