Akhilesh Yadav on Wednesday met the family members of Pushpendra Yadav, who was killed last week. 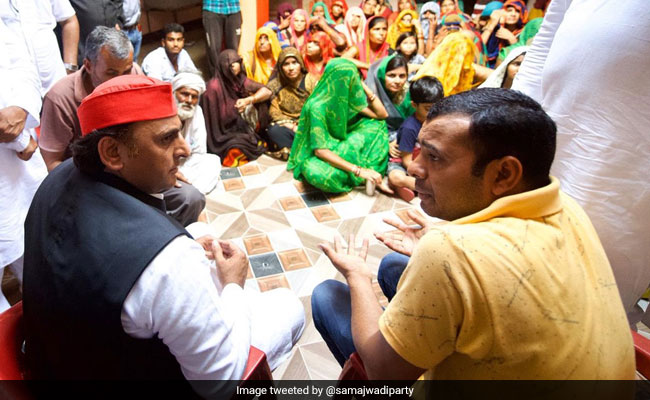 Akhilesh Yadav on Wednesday met the family members of Pushpendra Yadav, who was killed last week.

Samajwadi Party chief Akhilesh Yadav visited the home of a youth who was killed in a police encounter over alleged illegal sand mining, and lashed out at the BJP government, saying he had no trust in the state police and the administration.

Mr Yadav on Wednesday met the family members of Pushpendra Yadav, who was killed last week. "Not much should be expected from the police force of a state where the chief minister openly asks them to ''thok dalo'' (shoot) those taking law in their own hands," he said. "I have no faith in the police and administration of the state," the former Uttar Pradesh Chief Minister said.

Alleging that the police killed the youth in Jhansi last week in a staged gunfight, the SP president reiterated his demand for lodging of a murder case against the SHO involved and a probe into the incident by a sitting high court judge. "No one believes the police's theory on the encounter. Actually it is not an encounter but a murder by the police. The family members have not even got the postmortem report," he claimed, adding that the police should not have had any objection to the family's demand of filing a case.

"It is surprising that even the last rites were performed by the police without the family members. Is this Ram Rajya?" Mr Yadav asked. He alleged that there had been many such killings in Sonebhadhra, Saharanpur, Noida, Azamgarh and Shamli and the people had no faith in the probe by the government and administration.

"It is very unfortunate that the government and administration are together in saving the police station incharge. There appears to be some big conspiracy behind this," he said.

Mr Yadav said that he has assured the family all possible help. "There are many loopholes in the police story. The incident has sparked protests in the area," he stressed.

Mr Yadav's allegations of "loopholes" in the story come in the backdrop of statements by the Jhansi SSP and the SHO about the encounter.

While Jhansi SSP OP Singh had told reporters on the night of the encounter that the thana incharge was returning in his private vehicle after vacation when the incident took place, the SHO concerned said that he was on patrol at the time of incident.

The police claimed that Pushpendra ran a sand mining business and was shot dead on Sunday by a police team after he opened fire at the police inspector who had seized his truck used for sand mining, a few days earlier.

The family members of the deceased alleged that the police officer in charge of the area, Dharmendra Chauhan, was demanding Rs 1.5 lakh bribe to release the youth''s truck and he killed Yadav when he refused to pay and threatened to expose him.