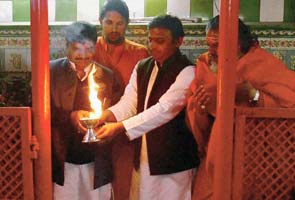 Boston: Uttar Pradesh Chief Minister Akhilesh Yadav, who was invited by the Harvard Business School to speak on organising the Maha Kumbh mela, cancelled his lecture and also skipped a reception hosted by the Indian consulate in New York, to protest against his senior minister Azam Khan's detention and questioning at the Boston airport in the US on Thursday.

Azam Khan, UP's Urban Development Minister and one of the senior-most members of the Samajwadi Party, has alleged that US homeland security officials humiliated him on the pretext of frisking him after he landed at Boston as part of a UP delegation, which had the chief minister, three ministers and some bureaucrats. He alleged he was singled out because he is a Muslim and also claimed that he was detained in the immigration chamber for more than an hour.

Mr Yadav, Mr Khan and another UP minister Abhishek Mishra cancelled their lectures at the prestigious university just hours before they were to speak.

The Samajwadi Party has demanded an apology from the US.

In New Delhi, External Affairs Ministry spokesman Syed Akbaruddin said India has asked its embassy in Washington to take up the matter appropriately with the US authorities.

Promoted
Listen to the latest songs, only on JioSaavn.com
The 40-year-old Mr Yadav and his two ministers were invited by Harvard to share how they organised the Maha Kumbh Mela in Allahabad and the challenges that the administration faced in managing millions of people who attended the event from January 14 to March 12 this year.

They are on a five-day visit to the US and are scheduled to return on Monday.