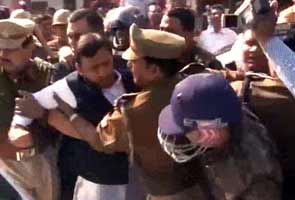 Akhilesh, who is the President of his party's unit in Uttar Pradesh, was to lead a protest against Mayawati's Bahujan Samjawadi Party (BSP), which is in power.

He landed in Lucknow from Delhi, where he had been attending the Budget session of Parliament.

"He was immediately sent to jail and even not allowed by the police to talk to media," party spokesman Ashish Yadav told reporters.

The police claim he was arrested as a preventive measure to keep the peace in the state - Mayawati has enforced prohibitory orders, banning large crowds from gathering.

Promoted
Listen to the latest songs, only on JioSaavn.com
Soon after his arrest, a number of SP party workers gathered at the Hazratganj crossing to register their protest.

The police allegedly hit them with batons, and some people are said to have been injured.