In the new poster of Baadshao, Emraan Hashmi features in a Rajasthani look, wearing a turban, kohled eyes and is holding a gun 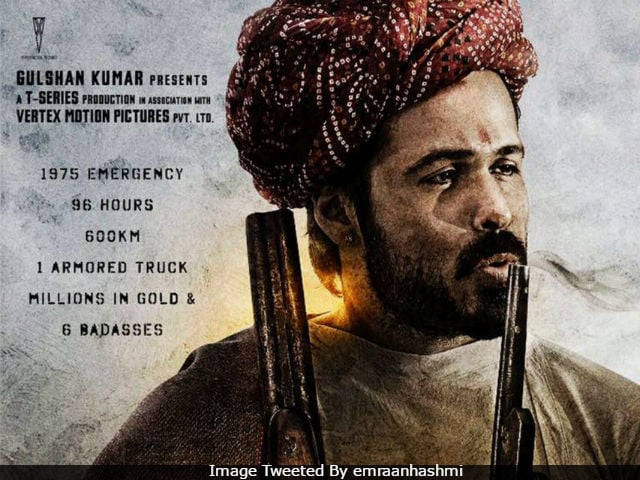 New Delhi: After actor Ajay Devgn unveiled his first look from Baadshaho, his co-star Emraan Hashmi shared what his character looks like inir upcoming film. While Ajay is 'the badass in the bandana,' Emraan Hashmi is 'the guns and roses badass' in Baadshaho. In the poster, the 38-year-old actor is seen in a Rajasthani look, wearing a turban, kohled eyes and is blowing away the gun smoke from the barrel in style. (Emraan Hashmi, too much swag). The actor shared the poster on Twitter with the caption that reads, "The guns and roses badass." The Milan Luthria-directed Baadshaho is a film set in the 1970s Emergency era.

The guns and roses badass! Look out for the exclusive look in today's @htshowbizpic.twitter.com/HlIdZ9c3Qt

The badass in the bandana! @Baadshahopic.twitter.com/QUvkhYvQrn

Ajay Devgn and Emraan Hashmi are co-stars of films such as Once Upon A Time In Mumbai, also directed by Milan Luthria and Dil Toh Baccha Hai Ji, which released in 2011. Baadshaho is Ajay Devgn's fourth film with Milan Luthria.

Baadshaho will be Emraan Hashmi's first release of the year. He last featured in Azhar, a biopic on former Indian cricketer Mohammad Azharuddin.

Ileana D'Cruz, Lisa Haydon, Esha Gupta and Vidyut Jammwal co-star with Ajay Devgn and Emraan Hashmi in Baadshaho. A couple of days ago, the first poster of the action-thriller was unveiled, which revealed the subject of the film. "1975 EMERGENCY... 96 hours... 600km... 1 Armored Truck... Millions in Gold & 6 BADASSES. Baadshaho Sandstorm Is Coming!," read the tagline of the poster.