Revenue officials removed the seal in the presence of police personnel and senior party leaders owing allegiance to Palaniswami, the interim General Secretary of the AIADMK. 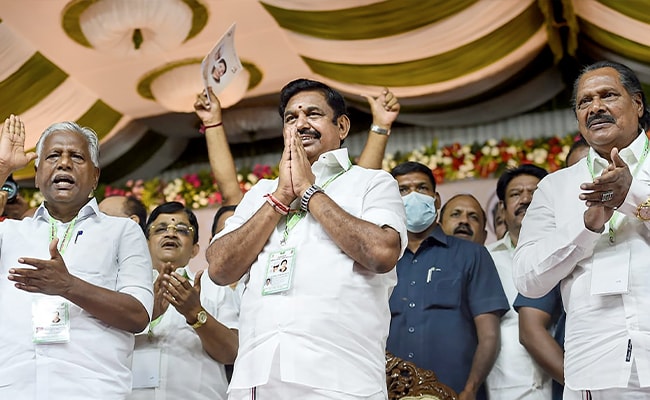 The party headquarters was locked and sealed that day following clashes between two groups.

The headquarters of the opposition AIADMK here - "MGR Maaligai" - was reopened on Thursday, 10 days after it was sealed by Revenue authorities following violence that broke out between supporters of then rival leaders K Palaniswami and O Panneerselvam.

Mr Shanmugam took the mediapersons around the party headquarters and showed the stones, hurled during the violent clash on July 11, still lying around, broken furniture and damaged computers.

Revenue officials removed the seal in the presence of police personnel and senior party leaders owing allegiance to Palaniswami, the interim General Secretary of the AIADMK.

The office was de-sealed following the Madras High Court order on Wednesday quashing the order of the Revenue Divisional Officer (RDO) sealing the AIADMK headquarters on July 11.

The party headquarters was locked and sealed that day following clashes between two groups of the AIADMK owing allegiance to Palaniswami and ousted leader Panneerselvam.

Amid a series of developments on that day, the party's General Council, its highest decision-making body, elected Palaniswami as the new interim general secretary dispensing with the dual leadership system in place and squeezed out Panneerselvam.

The RDO, invoking the powers under Section 145 of CrPC amidst clashes between the two groups, sealed the party headquarters.

On Wednesday, Justice Satish Kumar passed an order allowing the plea by Palaniswami, also a former Chief Minister, challenging the locking and sealing of the party headquarters and directed the RDO to hand over its keys to the latter.

The judge also directed the Royapettah police to provide adequate protection to the office located on Avvai Shanmugam Salai here, round-the-clock. No party cadres shall be allowed inside the office for one month to avoid any untoward incident, the judge added.

In compliance with the court order, the party cadres did not visit the headquarters today.

The revenue officials under Mylapore Tahsildar removed the seal and lock at the entrance gates and two other places inside the headquarters in the presence of police and senior leaders, former minister C Ve Shanmugam and V Mahalingam. They handed over the keys to the party manager.