"Against NRC, Muslims Must Be In Citizenship Law": BJP Ally Akali Dal

Naresh Gujral's comments come only days after Bihar Chief Minister Nitish Kumar, whose JDU is a key ally of the ruling BJP, hinted the NRC may not be implemented in his state

The Shiromani Akali Dal, an ally of the ruling BJP, is "totally against the NRC" (National Register of Citizens) and wants Muslims to be included in the list of refugees seeking citizenship under the Citizenship (Amendment) Act, or CAA, party leader and Rajya Sabha MP Naresh Gujral told NDTV today. "(We) feel the Muslim community should be included in the citizenship law," Mr Gujral said, explaining that the Akali Dal's position on the CAA was a "dilemma" because of Sikhs who had fled religious persecution and had been living in the country without citizenship.

"We voted for CAA but Mr Badal (Sukhbir Badal, the party chief) has said that Muslims must be included. For us, it was a dilemma because 60,000 to 70,000 Sikhs persecuted by Taliban in Afghanistan and in Pakistan have been in India for 10-12 years without citizenship," he said.

"Akali Dal represents Sikhs... but we also believe in tolerance. We had to vote but Mr Badal made it clear that we want Muslims to be included," Mr Gujral added.

"I can categorically state we are opposed to NRC... primarily because it creates insecurity in minds of minority communities. We hope BJP reconsiders NRC and shelves the citizenship law... we cannot have violence in the country and people getting killed. Need to put an end to this," he said.

Mr Badal made similar remarks last week amid massive anti-CAA and NRC protests in many parts of the country. The Akali Dal leader said his party "always talked about welfare of people of all religions, not just Sikhs".

Naresh Gujral's comments come only days after Bihar Chief Minister Nitish Kumar, whose Janata Dal (United) is a key ally of the ruling BJP, hinted the NRC, which was carried out in Assam and excluded 19 lakh people - many of who are now in detention camps - may not be implemented in his state.

The Chief Ministers of several other states, including Odisha's Naveen Patnaik and Andhra's Jagan Mohan Reddy, have also voiced their opposition. On Monday Bengal Chief Minister Mamata Banerjee wrote to several counterparts and opposition leaders to unite and "save India's soul". 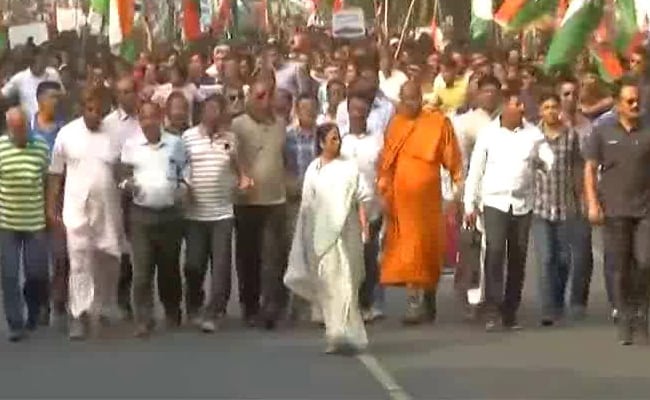 The government says the CAA, which, for the first time, makes religion the test of citizenship in India, will help minorities from three Muslim-dominated countries get citizenship if they fled because of religious persecution. Critics say it discriminates against Muslims and violates secular principles of the Constitution.

Massive protests have broken out nationwide against the CAA and NRC.

Violence killed 15 people - many of whom died from bullet injuries - in Uttar Pradesh last week. In Delhi protests have been staged on almost daily basis, with police involved in a brutal crackdown on Jamia Millia Islamia students and facing violence in several areas of the national capital.

Protests were also held in the North East and all southern states; two died from police firing in Mangaluru in Karnataka last week.

Referring to the protests, Mr Gujral said they were signs of a secular country expressing itself.

"Muslims know a large section of the country stands by them. We are a secular nation and this is being expressed every day," he said.

He also said several members of the BJP-led NDA were unhappy with the way they had been treated so far.

Last week Home Minister Amit Shah, who led the CAA through parliament, appealed to student protestors to "study" the law and not be misled by the opposition, who he alleged were "creating an atmosphere of violence".