Against AAP Alliance, Will Go By Congress Choice: Sheila Dikshit To NDTV 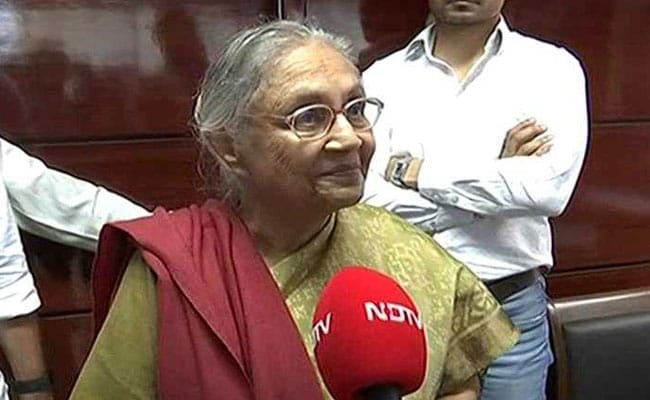 Sheila Dikshit spoke to NDTV on the possibility of tie-up with AAP.

A big divide within the Congress over an alliance with Arvind Kejriwal's Aam Aadmi Party (AAP) in Delhi is out in the open. Delhi Congress Chief Sheila Dikshit is dead against the idea, but told NDTV on Tuesday that she would abide by the party's decision.

Sources say other Delhi Congress leaders are pushing for it and have written to party chief Rahul Gandhi.

"I will go by whatever they decide. It's not that we really need an alliance but if the decision is taken, so be it," Sheila Dikshit told NDTV after a meeting of Delhi Congress leaders.

Sheila Dikshit, a three-time chief minister whose term ended with the AAP's stunning rise in Delhi, has warned in a letter to Rahul Gandhi and his mother Sonia Gandhi that an alliance with Arvind Kejriwal's party would hurt the Congress in the long run.

"I believe that the Congress is capable of doing everything itself. But if a decision is taken by everybody contrary to what I think, fine. I do believe in the strength and capacity of the Congress party," said the 80-year-old, who became the party's Delhi chief in January.

Sheila Dikshit maintained that Arvind Kejriwal had not approached her.

Reports suggest that the Congress is upset with AAP offering only one of Delhi's seven seats in a tie-up; the Congress wants three.

"The Congress worker today is charged up, very active. I am sure things will improve a lot. The Congress was in power for three consecutive terms. So it's not that we are without what it takes to be a leader," she said.

While Sheila Dikshit has strongly opposed joining hands with AAP, a senior Congress leader in charge of Delhi, PC Chacko, made it clear on Tuesday that "Delhi leaders have to follow the Congress's policy decision to go for alliances with parties opposed to the BJP".

In attempts to forge a tie-up between AAP and the Congress, Maharashtra politician Sharad Pawar has stepped in as mediator.

He is also expected to meet Rahul Gandhi, who will take a final decision.

Soon after the meeting, Arvind Kejriwal had declared that the Congress had rejected an alliance and he was "fed up of trying to convince the party".

However, after the Pulwama terror attack and its fallout, the Congress reportedly had fresh discussions over the alliance as the opposition reassessed its strategy to take on the ruling BJP.

An internal survey of the Congress reportedly showed the BJP ahead of both AAP and Congress with 35 per cent of the vote share in the capital. The findings were shared with the Congress president.

"Senior leaders cited the recent survey by the party which showed AAP vote bank to be around 28 per cent and Congress's 22 per cent while BJP's 35 per cent and argued that an AAP-Congress alliance will sweep all the seven seats in Delhi," sources have told NDTV.

Those in the Congress against the alliance believe that the move will be "suicidal" as the party has to face the Delhi assembly polls early next year in which its main rival will be AAP.