Digvijay Singh told reporters that he had been continuously writing letters to Shivraj Singh Chouhan on the issue of the project-affected people. 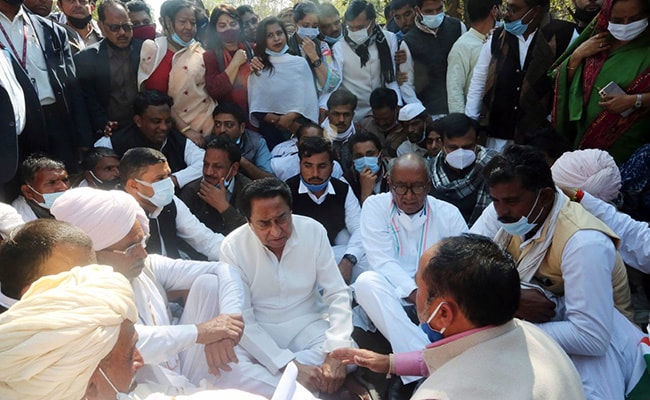 Congress leader Digvijaya Singh on Sunday met Madhya Pradesh Chief Minister Shivraj Singh Chouhan at his official residence, days after accusing the CM of not giving him an appointment over the plight of the people affected by Tem and Suthalia irrigation projects and staging a sit-in protest for a meeting.

He was accompanied by MP Congress president Kamal Nath.

Mr Singh claimed that he had been seeking an appointment for a long time to apprise Mr Chouhan about the plight of the affected people but the CM's office is dilly-dallying. He had also alleged that the appointment was fixed on Friday but it was cancelled at the last moment.

Mr Singh had also staged a sit-in protest on Friday.

"Digvijaya Singh and I called on the chief minister on the issue of the people affected by Tem and Suthalia irrigation projects. We apprised him about irregularities in the survey and compensation work. Farmers themselves talked to the CM," Mr Nath told reporters after meeting Chouhan.

Mr Nath said that he accompanied Mr Singh on the latter's request.

Mr Nath alleged that farmers are distressed as they are not getting fertilisers, seeds and fair price for their produce in MP whereas their land is being snatched for the big projects.

Mr Nath said he had bumped into Mr Chouhan at the airport hanger in Bhopal on Friday where he had landed from Chhindwara while the CM was leaving.

Mr Singh told reporters that he had been continuously writing letters to Mr Chouhan on the issue of the project-affected people.

Mr Singh said he was given an appointment for January 21 but it was cancelled suddenly by the CMO.

"I had talked to the CM office. It was not my mistake if officials didn't inform me (about cancellation of the meeting)," he claimed.