After Jallikattu, Calls For Lifting Ban On Animal Sport In Maharashtra, Karnataka 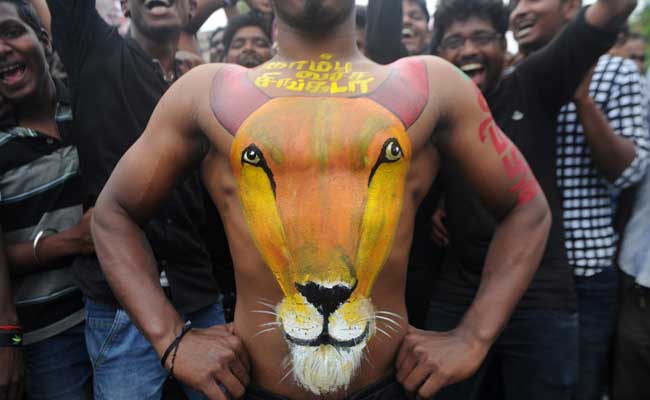 Policemen detain students who were holding a Jallikattu protest in Coimbatore.

Pune/Bengaluru: Lifting of the ban on Jallikattu has triggered renewed calls for revival of forbidden sports involving cattle like 'Kambala', a buffalo race in Karnataka, and 'Bailgadi Shariyat', the bullockcart race in Maharashtra.

Shetkari Sanghatana, a farmers' organisation in Maharashtra, on Tuesday demanded lifting of the ban on bullockcart racing in the state and threatened to launch a state-wide agitation over the issue.

A Shiv Sena MP from Pune district had also demanded a rollback of the ban on bullock cart races.

"Today, we held a meeting of farmers, owners of bullock carts, representatives of political parties at Miraj in Sangali district. During the meeting, it was decided that if the ban on bullockcart racing is not lifted and the sport is not allowed to be resumed in the state, we will launch a state-wide agitation," Raghunath Patil, president of Shetkari Sanghatana, said.

Meanwhile, Shiv Sena MP from Shirur constituency in Pune district, Shivajirao Adhalrao Patil, who had demanded lifting of the ban on the sport, on Tuesday said soon his party's delegation would meet Chief Minister Devendra Fadnavis to press for the demand.

He had earlier said that taking a cue from Tamil Nadu Chief Minister, Mr Fadnavis should approach the Prime Minister and seek a central ordinance to lift the ban on bullockcart racing.

Bullock cart races were first outlawed in 2012. It later provided a brief relief but banned the sport again in 2014.

According to protesters, the bullock cart races have a 400- year-old history in the state, with farmers rearing these bullocks especially for such events.

In Mysuru, Karnataka Chief Minister Siddaramaiah said an ordinance can be brought, if necessary, to allow the conduct of traditional buffalo race 'Kambala' in coastal areas after seeking legal opinion.

"Kambala is a rural sport that is especially organised in the coastal region. We do not have any opposition to it. It is in court now... It is coming up for hearing. We will see what will happen and if there is a necessity, an ordinance can be brought.

"Let's see. Anyway, Assembly (session) will start from February 6. Let's see... after talking to the Legal department, we will take a decision. But we are in favour of Kambala," he told reporters here.

A Karnataka High Court Division Bench, headed by Chief  Justice S K Mukherjee, had in November last year stayed holding of Kambala on a PETA petition challenging it in view of orders passed by the Supreme Court on Jallikattu.

Promoted
Listen to the latest songs, only on JioSaavn.com
The Chief Minister had on Monday asked the Centre to take a favourable stand on the matter as it did for Jallikattu in Tamil Nadu.

Amid growing protests by pro-Jallikattu people, the Tamil Nadu government had on Saturday promulgated an ordinance to allow the bull taming sport. The state assembly yesterday unanimously passed a bill replacing the ordinance.