At least 23 were killed and 27 were injured in a blast at a firecracker factory in Batala of Gurdaspur district on Wednesday. 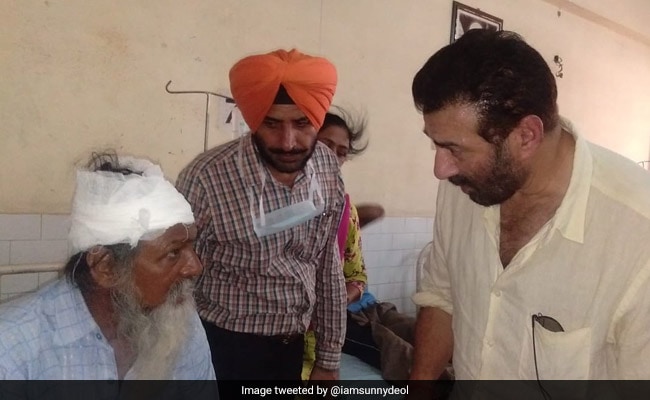 At least 23 were killed and 27 were injured in a blast at a firecracker factory in Batala of Gurdaspur district on Wednesday.

Sunny, who successfully contested the 2019 Lok Sabha elections from Gurdaspur on a BJP ticket, rushed to his constituency after he heard of the news, veteran actor Dharmendra said lauding Sunny for keeping the interests of his people above his family and work.

"For Sunny, this is a big and very important day but he chose to go there to be with the families in Punjab and this is a sign of a good human being. He told me to take care of the launch event today, I said, I will," Dharmendra told reporters.

Dharmendra, who was a BJP MP from Rajasthan's Bikaner constituency from 2004 to 2009, said his family is in politics for public service.

"I have not learnt the ABC of politics, we don't know what is Rajya Sabha or Lok Sabha, I just followed my heart and orders of almighty and started working towards the progress of Bikaner. I request and challenge media people to go to Bikaner and see my work there.

"We are not politicians. We are good human beings, then actors and then anything else. He (Sunny) will do his best for the society. There are people around you, pulling you down, and no one appreciates you. I believe we should focus on our work. I am sure he (Sunny) will do it and show it," the 83-year-old veteran said.

The event was earlier scheduled for Wednesday but Sunny decided to cancel it due to heavy rains in the city.

Talking about his father's plunge into politics, Karan said, "My dad always does what is right and if he decides to do something he doesn't let go of it. With this decision, he will try to make most of it. "He thinks from his heart and he will do everything from his heart to push things ahead in his constituency," he added.

The film, which also launches newcomer Sahher Bambba, is scheduled to release on September 20.