The woman was protesting the gruesome rape and murder of a veterinary doctor on the outskirts of Hyderabad. 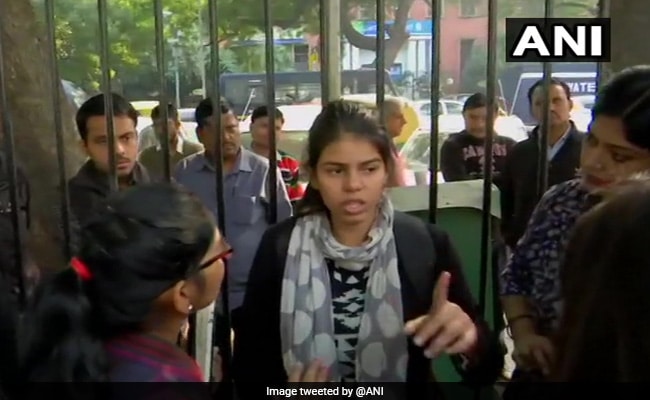 The AAP on Saturday criticized the alleged misbehaviour by Delhi police personnel with a young woman who had sat on a pavement near Parliament holding a placard in protest against increasing incidents of crime against women.

Calling the act "shameful", AAP leader Sanjay Singh questioned why the Delhi police was "scratching" the woman, and said all she was demanding was justice for a 27-year-old doctor in Hyderabad who was raped and killed.

"The behaviour (of police) with her depicts the deterioration of law and order situation in Delhi and inactivity of the Centre. The incident and the attitude of the police towards her is shameful," he told reporters, in response to a question.

The woman identified as Anu Dubey was holding a placard with the slogan ''Why I can't feel safe in my own Bharat'' while sitting on the pavement near Parliament gate number 2-3.

She was asked to go to Jantar Mantar to continue her protest, but when she refused, she was taken to Parliament Street police station in a police vehicle.

Swati Maliwal, the chairperson of Delhi Commission for Women, alleged that the woman was beaten by police. However, police denied the allegation.

Ms Dubey's protest came a day after the charred body of a 27-year-old veterinary doctor was found on the outskirts of Hyderabad sparking national outrage. She was raped and killed allegedly by four men who had deflated the tyres of her two-wheeler.

In Ranchi, a 25-year-old law student was allegedly raped by a group of armed men, following which all the 12 accused were arrested.

India's First 2 Omicron Cases In Karnataka, One Is Foreigner