The massive pile-up took place near Haryana's Jhajjar. Sevenof the eightdead are women.

Images from the spot showed wrecked cars being removed from the road after the pile-up.

Eight people were killed and several injured in a massive pile-up of 50 vehicles, including school buses, because of dense fog on the Rohtak-Rewari highway between Delhi and Haryana this morning.

The incident took place near a flyover in Haryana's Jhajjar. Seven of the eight dead are women. 10 of the injured are critical.

Images from the spot showed wrecked cars being removed from the road and people being pulled out of mangled vehicles.

There was a two-km traffic jam on the highway because of the accident.

The eight people who died were travelling in an SUV from their village to outer Delhi's Najafgarh for a condolence visit when it collided with a truck. 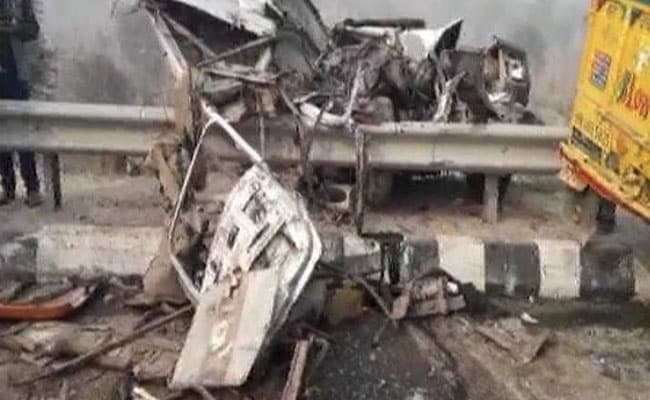 A school bus and a number of cars are among the vehicles that collided due to poor visibility.

"As the cruiser jeep was involved in an accident with a truck, other vehicles which were close behind also rammed each other. The visibility was poor due to dense fog," a Jhajjar police official was quoted as saying by news agency PTI.

Haryana agriculture minister Om Prakash Dhankar visited a government hospital in Jhajjar where the injured were taken. The state govenrment has annoucned a compensation of Rs. 2 lakh to the families of the dead and Rs. 1 lakh each for the injured.

Several parts of Haryana, Delhi, Punjab, Uttar Pradesh and Rajasthan were engulfed in thick fog in the morning. The visibility was as low as 500 metres in many areas. "Cold weather combined with the availability of moisture will result in foggy conditions over northwest India. This dense fog is likely to reduce visibility over Punjab, Haryana, north Rajasthan, Delhi and Uttar Pradesh resulting in difficulty for commuters in the morning and noon hours," private weather forecasting agency Skymet said stated Skymet.