Yesterday, the Supreme Court dismissed a petition that asked that the centre be ordered to provide food and water to migrants on the move. 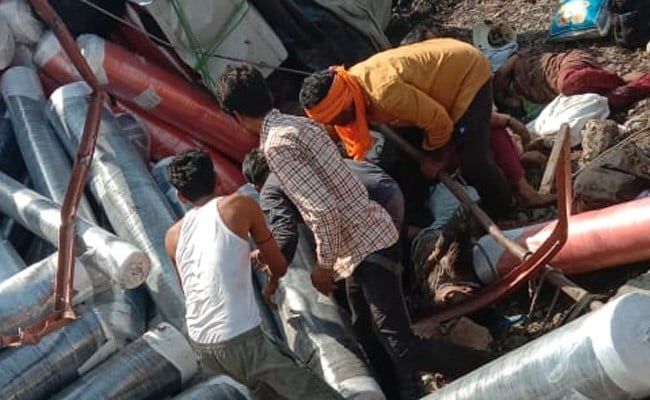 The accident in Madhya Pradesh was reported at around 10 am.

Six migrant labourers, including three women, were killed and 19 were injured when a truck they were travelling in overturned in Madhya Pradesh this morning near the Sagar-Chhatarpur border, hours after the collision of two trucks in Uttar Pradesh's Auraiya district killed 24 migrants.

The group of migrants who were killed in Madhya Pradesh were also headed to UP. They were coming from Maharashtra. Those injured were rushed to hospitals, said officials. The incident was reported in the Sagar district, about 200 km from state's capital Bhopal, at around 10 am.

In one of the distressing videos from the accident site, an infant can be seen crying next to a woman's body, probably the child's mother. The rescue operation was launched soon after the accident was reported as senior officials from Sagar and Chhatarpur district reached the site and helped the injured.

In a tweet, Chief Minister Shivraj Singh Chouhan offered condolences. "I got the news of death of migrant labourers in Sagar. May god ensure them an eternal heavenly abode and their families get the strength to bear the grief," he wrote in Hindi.

Heart-breaking visuals have been emerging from across the country ever since lakhs of labourers were left stranded without jobs in March due to coronavirus lockdown. While many have died while walking hundreds of kilometres to their homes, more than 50 have died in separate accidents since last week.

At least 31 migrants have died in the last 24 hours while trying to return home amid coronavirus lockdown. Of these 24 were killed in UP's Araria district at around 3 am. Two others were killed yesterday in Unnao district, about 60 km from Lucknow.

On Thursday, six migrant workers were run over by an Uttar Pradesh government bus on a highway in the state's Muzaffarnagar district.

Last week, 16 labourers in a group of 20 were killed after a cargo train ran over them while they were sleeping on the tracks in Maharashtra's Aurangabad. They were walking from Jalna in Maharashtra to Bhusaval in Madhya Pradesh, 157 km apart.

On Sunday, five were killed when a truck overturned in a village in Madhya Pradesh.

Yesterday, the Supreme Court dismissed a petition that asked that the centre be ordered to provide food and water to migrants on the move.