40 Pistols Seized In Madhya Pradesh After Car Chase, Search On For Accused

Acting on a tip-off, the police intercepted a Haryana-registered car on Agra-Mumbai National Highway in Indore's Rau area in the early hours of Monday. 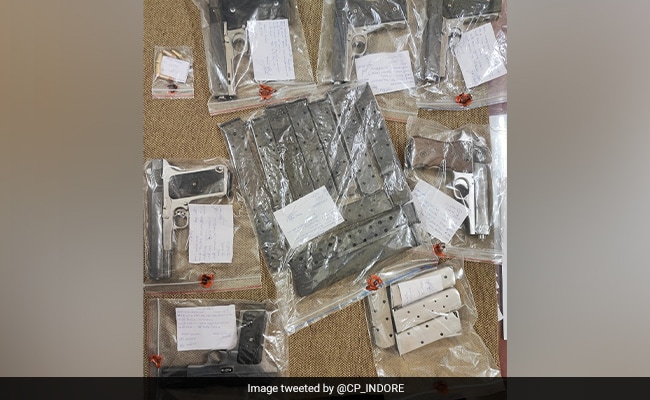 At least 40 pistols, 36 magazines and five cartridges were recovered from the vehicle.

A cache of illegal weapons, including 40 pistols and 36 magazines, were seized from a car after a long chase by the police in Madhya Pradesh's Khargone district, an official said on Tuesday.

Acting on a tip-off, the police intercepted a Haryana-registered car on Agra-Mumbai National Highway in Indore's Rau area in the early hours of Monday, Police Commissioner Harinarayanchari Mishra told reporters.

In a bid to avoid the police, the driver increased the speed of the car and while fleeing, hit a police vehicle, he said.

Four people travelling in the car then reached Khalghat, about 90 km from Indore, where they again hit a police vehicle and the barrier, the official said.

After constant chase and police blockade, the accused of the inter-state gang left the car in Sanawad area of Khargone district and fled towards the dense forest, he said.

At least 40 pistols, 36 magazines and five cartridges were recovered from the vehicle, which had a Haryana registration number, the official said.

"These weapons are advanced imitations of foreign weapons. The magazines recovered from the car can be filled with 30 cartridges, whereas a normal magazine can only accommodate 10," he said.

A search has been launched for the accused and a probe has been initiated to trace the source of the weapons, the official said.